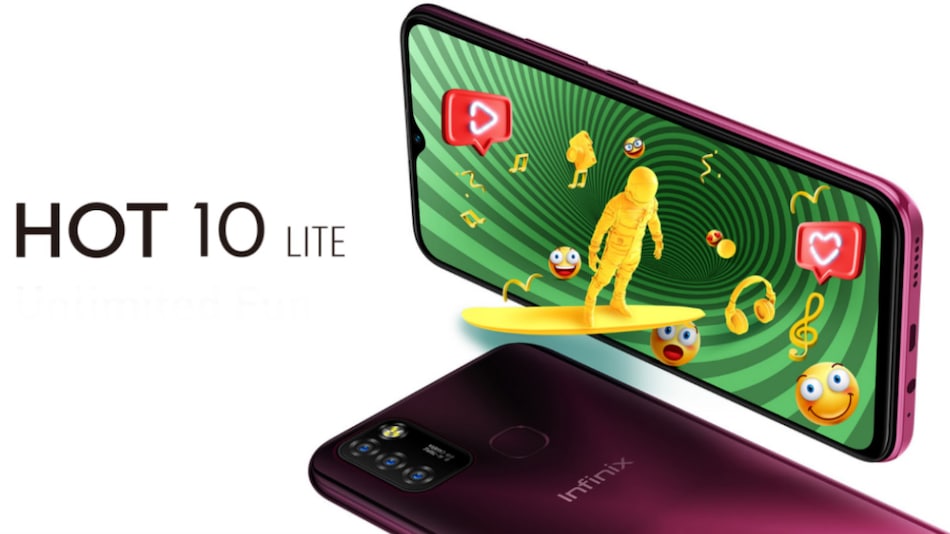 Infinix Hot 10 Lite has been launched in Africa. While the Lite variant made its global debut today, the standard model was recently launched in Pakistan. Infinix Hot 10 Lite is powered by the MediaTek Helio A20 SoC. It features triple rear cameras and a 5,000mAh battery. It also offers security features such as fingerprint scanning and face unlock. There is an 8-megapixel selfie shooter, similar to the one seen in Infinix Hot 10.

As per the smartphone's listing on the company website, the Infinix Hot 10 Lite comes in a single 2GB + 32GB storage configuration. The listing also shows that the phone will be offered in four colour options. Although the specific names of the hues aren't mentioned, the phone is seen in shades of black, purple and two variants of blue. According to the company, the Infinix Hot 10 Lite will retail at NGN 45,400 (roughly Rs. 8,700) in Nigeria and at GHS 599 (roughly Rs. 7,600) in Ghana.

Visit the nearest Infinix accredited shop to grab yours now!????

Go get it now on XPark Nigeria via https://t.co/bkzF9vZ2wf#InfinixHot10 pic.twitter.com/JZ8PTDfc9z

The dual-SIM (Nano) Infinix Hot 10 Lite runs on Android 10 (Go edition). It features a 6.6-inch IPS display with a resolution of 720x1,600 pixels. Under the hood, the smartphone is powered by the MediaTek Helio A20 SoC, paired with 2GB RAM. Its inbuilt storage of 32GB can be expanded (up to 256GB) via a microSD card.

For photos and videos, the smartphone comes with a triple rear camera setup that comprises a 13-megapixel shooter along with two QVGA sensors. For selfies, the handset comes with an 8-megapixel front camera. It packs a 5,000mAh battery that is claimed by the company to provide 33 hours of talk time. The fingerprint scanner is placed within a circular module on the back. The phone also comes with face unlock feature. Connectivity options on the phone include a 3.5mm headphone jack, Wi-Fi 5, Bluetooth 5.0, and a 3.5mm headphone jack.