Xiaomi and Vivo sold the most number of smartphones in Q2 2020 capturing 30.9 percent and 21.3 percent market share respectively. 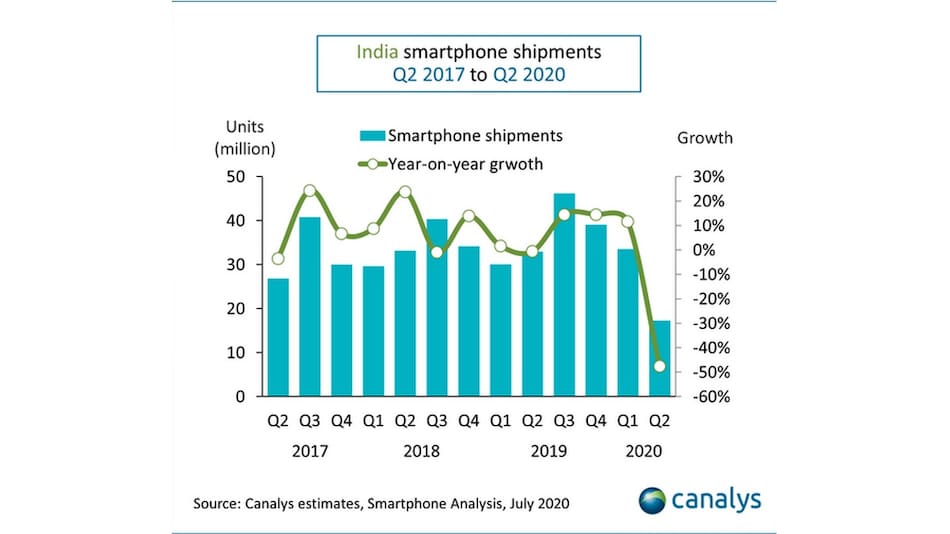 Samsung experienced the worst decline in smartphone sales for Q2

Indian smartphone shipments were down 48 percent in the second quarter of 2020 due to production disruptions and import delays, according to research firm Canalys. A total of 17.3 million smartphones were shipped in India in Q2 this year compared to 33 million in Q2 2019. The report by Canalys says this decline was due to the disruptions in production and diminished demand caused by the ongoing coronavirus pandemic. Xiaomi (including sub-brad Poco) sold the most number of phones at 5.3 million, capturing 30.9 percent of overall market share.

According to the data from Canalys, smartphone shipments in India in the second quarter of this year were almost half of the numbers from Q2 last year. The 33 million smartphone shipments of Q2 2019 came down to 17.3 million in Q2 2020 due to the lockdowns and disruptions caused by coronavirus pandemic. Xiaomi, including Poco, was on top with 5.3 million smartphone units sold followed by Vivo with 3.7 million units. Interestingly, Vivo's market share grew from 17.5 percent in Q2 2019 to 21.3 percent in Q2 this year. Samsung took the third spot with 2.9 million smartphones sold, 16.8 percent market share captured.

Apple, on the other hand, saw a decline of 20 percent in year-on-year smartphone shipments to little over 2,50,000 units in Q2 2020. The analysis firm stated that among the top 10 vendors, Apple was “least impacted.”

Canalys Analyst Madhumita Chaudhary said, “While vendors witnessed a crest in sales as soon as markets opened, production facilities struggled with staffing shortages on top of new regulations around manufacturing, resulting in lower production output.” The analyst added that companies like Xiaomi and Vivo have chosen an O2O (offline-to-online) strategy to cater to their massive offline network during these times. Further, it was also noted that even though the anti-China sentiment and ‘Aatmanirbhar' initiatives are going strong in India, the effect on Chinese smartphone makers including Xiaomi, Oppo, Vivo, and Realme is “likely to be minimal.”

Lastly, Canalys added that the Jio 5G announcement has given hope to most vendors that have suffered a loss during the pandemic.