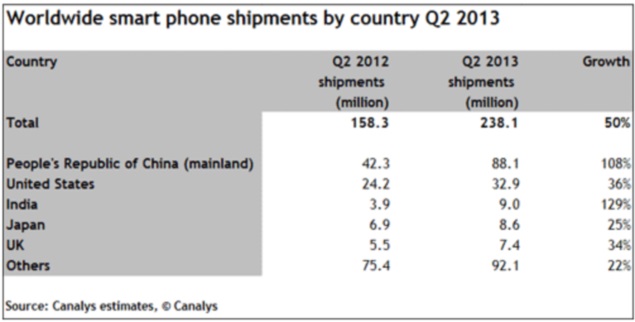 India has now become the third-largest smartphone market after China and the United States in terms of smartphone shipments, according to the latest report by Canalys.

The Canalys report mentions that the top five smartphone vendors in India include Samsung, Micromax, Karbonn, Sony and Nokia.

Jessica Kwee, Canalys Analyst on Indian smartphone market said, "Samsung has invested heavily in its brand and channel relationships over a number of years, which has given it a big advantage over many of its international competitors. Samsung took over a third of the Indian market this quarter, followed by local vendor Micromax at 22 percent. Karbonn, Sony and Nokia made up the top five."

The report also suggests that the dynamics of the market make it challenging for international vendors, besides Samsung, to succeed.

The report notes that smartphone shipments in China grew 108 percent year-on-year, which is the second highest growth rate, taking the total shipments to the market to 88.1 million. This represented over a third of all worldwide shipments. Lenovo took second place in China this quarter, where it shipped 10.8 million smart phones.

The report also takes note of platform-wise growth and suggests that Android grew the fastest during the quarter, by 79 percent year-on-year. Android now powers 190 million, or 80 percent, of the smartphones shipped in Q2. While the share of Apple's iOS fell to 13 percent as the Cupertino based company is gearing up to unveil new products in the second half of 2013.

It's worth pointing out that Canalys, an independent analyst firm compiled the shipments data for vendors in around 50 countries that it tracks, so the findings might be different from actual sales data.