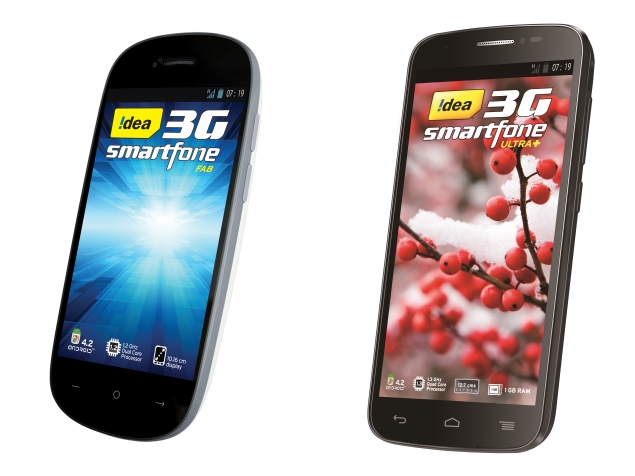 Taking advantage of the decent run with its self-branded smartphones, Idea Cellular on Tuesday launched two new smartphones, the Fab and Ultra+, priced at Rs. 4,999 and Rs. 8,300 respectively.

The Idea Ultra+ is a dual-SIM smartphone with a leather back finish. It has an unspecified 1.3GHz quad-core processor with 1GB of RAM and it runs on Android 4.2.2 (Jelly Bean). The ODM for Idea's Ultra+ is Alcatel, and Idea is working with the company to upgrade the Ultra+ to KitKat soon. The phone has a 5-inch screen with a resolution of 480x854 pixel. There is also an 8-megapixel camera with flash onboard. A 2000mAh battery will provide the juice for the Ultra+. Apart from the internal storage space of 4GB, of which approximately 2GB is available for users, the Ultra+ also accepts microSD cards (up to 32GB).

The comparatively cheaper Idea Fab dual-SIM smartphone has a smaller 4-inch screen with a resolution of 480x800 pixels. The Android 4.2 Jelly Bean-based Fab will be manufactured by Commtel. It has a 3.2-megapixel rear camera with flash and no front-facing camera. A 1.2GHz dual-core processor sits under the hood, coupled with 512MB of RAM. Featuring 4GB of built-in storage, Idea Fab also accepts microSD cards up to 32GB.

Talking about the smartphones Shankar said, "With the mobile phone increasingly becoming the first screen for a majority of users across semi-urban and rural India, Idea has remained focus at proliferating mobile internet through these smart devices by making them available at affordable price points for increased adoption. The new Idea Ultra+ and Fab will offer a wider choice of 3G smartphones in the low to mid segment price category, while giving our users an experience of high-end smartphones."