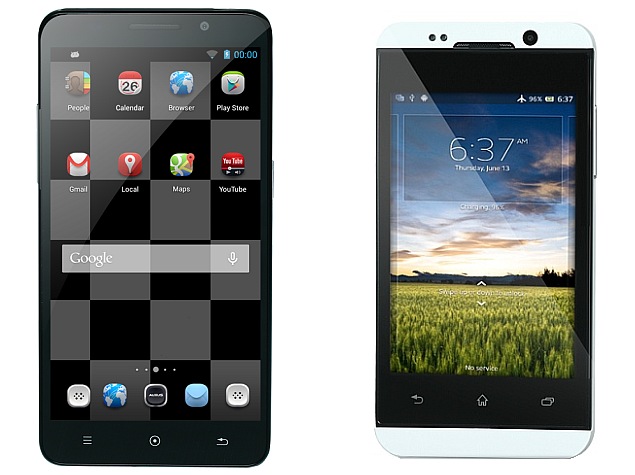 Iberry, expanding its smartphone portfolio in India, has launched the Auxus Nuclea X (left, and below) and Auxus Handy H01 (right) at Rs. 12,990 and Rs. 4,990 respectively.

The company has announced that both the devices will be available starting May 5, and will be exclusively available on e-commerce website, eBay.

The iberry Auxus Nuclea X is the company's second smartphone to feature the 1.7GHz octa-core MediaTek MT6592 processor (the other being the Auxus Nuclea N2). The octa-core processor is coupled with 1GB of RAM and the Mali-450 GPU. The Auxus Nuclea X features a 5-inch HD (720x1280 pixels) IPS display with OGS technology. It runs Android 4.2 Jelly Bean and offers dual-SIM (GSM+GSM) support with dual standby.

The smartphone sports a 13-megapixel autofocus rear camera with LED flash, while there is an 8-megapixel front-facing camera also onboard. The Auxus Nuclea X handset comes with 8GB of inbuilt storage, which can be expanded up to 64GB via microSD card.

The iberry Auxus Handy H01, on the other hand, is also a dual-SIM (GSM+GSM) device which runs Android 4.2 Jelly Bean. It comes with a 4-inch IPS display of unspecified resolution, and is powered by a 1.3GHz dual-core MediaTek MT6572 processor with 512MB of RAM and Mali 400 GPU.

The Auxus Handy H01 comes with 2GB of inbuilt storage, which is further expandable via microSD card (up to 32GB). It sports a 3-megapixel rear camera, while there is a secondary 1.3-megapixel front-facing camera also onboard.

On the connectivity front, the Auxus Handy H01 includes 3G, Wi-Fi, Micro-USB, and Bluetooth. The smartphone packs an 1800mAh battery.

Apple offers to replace sleep/ wake button in faulty iPhone 5 units
How to avoid Game of Thrones spoilers without cutting off from Facebook, Twitter