Huge at CES, but Huawei, Lenovo and ZTE find US a tough market to crack 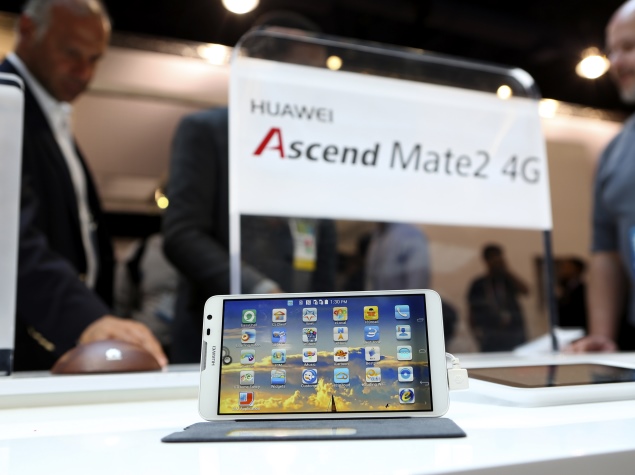 LG Electronics executive Frank Lee bounded onto a Las Vegas stage this week to show off a new phone for the U.S. market, the 6-inch G-Flex, which boasts a curved screen.

Two hours later, in another room at the same hotel, Huawei Technologies' Richard Yu unveiled the razor-thin Ascend Mate 2, bragging it had a battery life of nearly two days.

There was one key difference between the two product launches at the Consumer Electronics Show: the South Korean G-Flex will be sold through three U.S. carriers - T-Mobile U.S. Inc, AT&T Inc and Sprint Corp. The Chinese Ascend Mate 2? None, at least not yet.

In two years, China's three biggest handset makers - Huawei, ZTE Corp and Lenovo Group Ltd have vaulted into the top ranks of global smartphone charts, helped in part by their huge domestic market and spurring talk of a new force in the smartphone wars.

Chinese companies took up more showspace at CES than ever before, eager to tout their products to the world's largest electronics market. Still, analysts said it will likely take years for the Chinese to make headway in the United States, where arguably the only Asian brand to have succeeded is Samsung Electronics Co Ltd.

Aside from their struggles to get onto store shelves - U.S. carriers sell nine-tenths of the country's handsets - Chinese handset makers continue to grapple with low brand awareness, perceptions of inferior quality, and even security concerns.

"The talk last year was premature," said Frank Gillett, an analyst with Forrester Research. "It's one thing to have the product. It's another thing to have all the relationships, build the distribution channels and do the marketing.

In the third quarter of last year, ZTE and Huawei accounted for 5.7 percent and 3 percent of all phones sold in the United States, respectively, trailing Apple Inc's 36.2 percent and Samsung's 32.5 percent, according to IDC.

(Also see: iPhone most popular in US, while Android popular worldwide in Q4 2012: Report)

While Samsung was able to use Google Inc's Android software to offer a viable rival to the iPhone, that path now is too well trodden with many brands offering Android phones.

The Chinese are coming
It's not for lack of trying. Karen Chupka, one of the organizers of CES, said more than 1,800 Chinese companies turned up this year. She did not provide a comparison.

Huawei and ZTE occupied prominent - and pricey - positions at the center of one of the cavernous halls. Huawei said it doubled the size of its booth in two years, and even parked a Mercedes sedan on the floor to attract participants.

For Huawei and ZTE, the push into handsets came amid a general slow-down in their bread-and-butter business of selling networking equipment to telecoms companies.

Frustrated by accusations on Capitol Hill that national security would be compromised if Chinese networking equipment were installed in the United States, they have sought to double down on handsets for American consumers instead.

"That's a cloud over Huawei's ability to operate here," said Endpoint Technologies analyst Roger Kay. "Huawei suffers from something that Lenovo is also smeared with, but Huawei is tarred even worse than Lenovo ever was" in part because of persistent reports about its ties to the Chinese military.

Compared to many other markets where consumers buy phones at full price for use on pre-paid plans, 92 percent of Americans buy heavily subsidized devices through carriers, IDC says.

"The key to success in the U.S. is the carriers," ZTE USA President Lixin Cheng told Reuters this week in Vegas. He pointed to a nearby stack of papers. "That's my schedule."

ZTE unveiled late last year the Grand S, an unlocked phone that arrived in the U.S. market to mixed reviews. This week, the company unveiled a successor device, the Grand S II.

Billed as the world's slimmest smartphone, Huawei's Ascend P6 debuted to mostly positive reviews last year but was never picked up in the United States.

T-Mobile said it carries Huawei and ZTE devices, and Sprint said it sells a ZTE device. But these phones are not easily found in stores nor are they promoted on the carriers' websites.

AT&T and Verizon did not respond to requests for comment.

There's hope
Still, some analysts think the Chinese firms may have a better shot if the U.S. wireless operators change how they sell handsets. T-Mobile made waves last year when it said it would eliminate contracts for customers who pay full price for phones, and its bigger rivals followed suit with similar offers.

More changes may be underway: at CES this week, T-Mobile offered to pay termination fees for users who switch over, essentially offering more freedom to move than before.

Huawei and ZTE could make headway if carriers slash subsidies and more consumers are willing to pay full price, giving them an edge over high-end phones. But they may not see meaningful gains for at least two years, said ABI Research analyst Michael Morgan.

"They are already setting themselves up for where the puck is going to be tomorrow, when price becomes visible to the consumer again," Morgan said. "There's the crack in the armor for them to sneak through."

Just as essential is marketing, something Chinese firms have less experience with than their foreign rivals. Huawei last year uploaded a tongue-in-cheek video of a man asking people around New York's Times Square to pronounce "Huawei." Most failed.

And "ZTE apparently has zero brand presence. No one knows who ZTE is," Kay said.

In Vegas, Huawei touted figures showing brand recognition has doubled worldwide in the past year. But the least progress was made in the United States and Japan, where its brand awareness rose 5 percent and 9 percent, respectively.

The Chinese firm has been marketing directly to consumers only in the past three years, sponsoring European sports events and music events, such as a recent Jonas Brothers tour.

ZTE signed a deal with the Houston Rockets basketball team and released a Rockets-branded phone. Yet it will be hard-pressed to match Samsung's 2013 marketing budget of $14 billion, greater than Iceland's economy.

"Our approach is grassroots, not like many tier-one brand names," Cheng said. "They're burning hundreds of millions of dollars of your money - consumer money - to build their brand."

Some think Lenovo stands the best chance of cracking the local market, given its longer track record here and a more established brand in the United States, courtesy of its 2005 acquisition of IBM's PC division.

Lenovo itself expressed an interest in October in Blackberry, but the deal was reportedly nixed by Canadian regulators. Lenovo USA president Gerry Smith declined to discuss specific deals but said Lenovo will "continue to look."

Kevin Restivo, an IDC analyst, said the Chinese contenders were making the right moves but it would take time.

"The Chinese smartphone makers have grown by leaps and bounds," Restivo said. "But there's a lot of heavy lifting in order for them to approach Samsung as far as status, brand and market share in the U.S. It's very early days."

From the CES floor: The robots are coming, and they're here to help
Forget smartphones, 2014 set to be the year of smarter cars