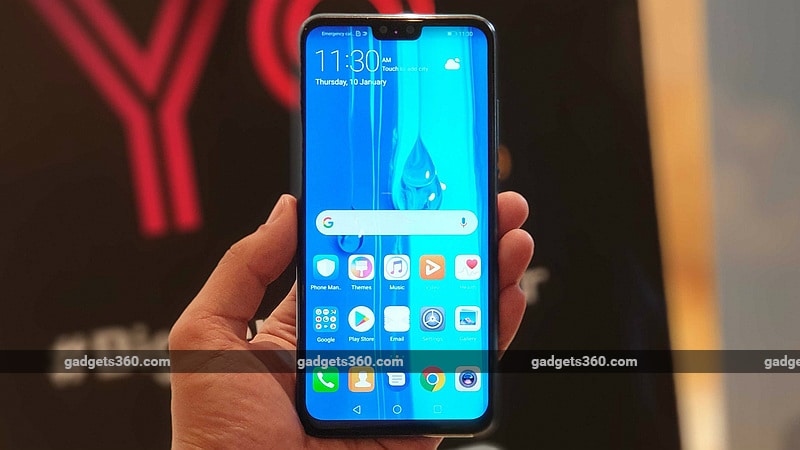 Huawei Y9 (2019) has been launched in India. The new model comes as a successor to the Huawei Y9 (2018) and sports four artificial intelligence (AI) powered camera sensors. The AI integration is touted to enable the Huawei Y9 (2019) to see more than 500 different scene types by creating 22 category labels to offer real-time image optimisation. Huawei has also provided a 3D arc design that is made of a nanostripe technology. There is also the company's GPU Turbo technology that is claimed to deliver two times the GPU efficiency and a 1.3 times increase in overall GPU performance. Key highlights of the Huawei Y9 (2019) include a 6.5-inch display along with a traditional notch, dual rear and front cameras, HiSilicon Kirin 710 SoC, and a 4,000mAh battery.

The Huawei Y9 (2019) price in India has been set at Rs. 15,990 for the 4GB RAM/ 64GB inbuilt storage model. It will be exclusively available for purchase through Amazon.in from January 17. It will come in Midnight Black and Sapphire Blue colour options. As a limited period promotional offer on Amazon India, Huawei is bundling Boat Rockerz Sports Bluetooth headphones worth Rs. 2,990 with the smartphone.

The dual-SIM (Nano) Huawei Y9 (2019) runs EMUI 8.2 based on Android 8.1 Oreo and features a 6.5-inch full-HD+ (1080x2340 pixels) FullView Display panel with a 3D curved design and a 19.5:9 aspect ratio. Under the hood, the smartphone has an octa-core Kirin 710 SoC that comes with AI Power 7.0 and GPU Turbo technologies, paired with 4GB RAM option. The smartphone has 64GB of inbuilt storage that is expandable via microSD card (up to 256GB) via a dedicated microSD card slot.

Both front and rear camera setups of the Huawei Y9 (2019) are claimed to enhance shots using AI-based features. The camera sensors are also touted to be capable of recognising scenes to provide realtime optimisation.

Huawei Y9 (2019) will be available for purchase through Amazon.in from January 15

The Huawei Y9 (2019) has 4G LTE, Wi-Fi, Bluetooth, GPS/ A-GPS, and Micro-USB. Sensors on board include an accelerometer, ambient light sensor, digital compass, gyroscope, and proximity sensor. The smartphone also has a fingerprint sensor at the back that supports Fingerprint 4.0 identification technology. Besides, the smartphone packs a 4,000mAh battery, claimed to provide up to 65 hours of music playback and 9 hours of video playback. It measures 162.4x77.1x8.05mm.

Editor's note: An earlier version of this article said the Huawei Y9 (2019) would go on sale in India on January 15 - Huawei India has since changed the release date of the smartphone to January 17.