Huawei saw a decline of 27 percent in international smartphone shipments but the sales in China kept it on top. 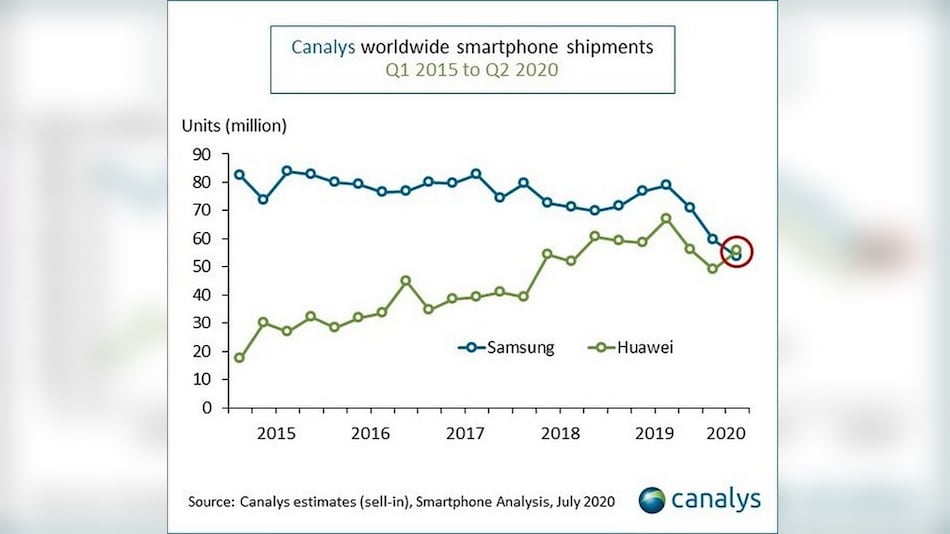 Huawei has beaten Samsung, Apple for the first time in 9 years

Huawei, for the first time, has become the number one smartphone manufacturer in Q2 2020 in terms of shipments according to the latest data by research firm Canalys. Huawei came in ahead of Samsung, Apple and all other smartphone manufacturers and shipped 55.8 million devices in the second quarter of this year. It is the first time a manufacturer other than Samsung or Apple has taken the top spot in 9 years, as per Canalys. The reason behind Huawei's success according to the research firm is the coronavirus pandemic.

A Huawei spokesman said, “Our business has demonstrated exceptional resilience in these difficult times,” as per a report by Reuters. On the other hand, Samsung said in its second quarter results report that it expects to see more growth in the second half of this year as demand gradually recovers.

Canalys Senior Analyst Ben Stanton said, “This is a remarkable result that few people would have predicted a year ago. If it wasn't for COVID-19, it wouldn't have happened. Huawei has taken full advantage of the Chinese economic recovery to reignite its smartphone business.”

According to the report by Canalys, because China has reopened its factories, economic development is continuing, and new outbreaks are being handled in a much better manner, Huawei has managed to come out on top. However, another analyst at the research firm pointed out that sales in China alone will not be enough once the global economy starts to recover and it will become difficult for Huawei to maintain its top spot.