Huawei teased the launch of the upcoming Huawei P50 Pocket smartphone on Twitter. 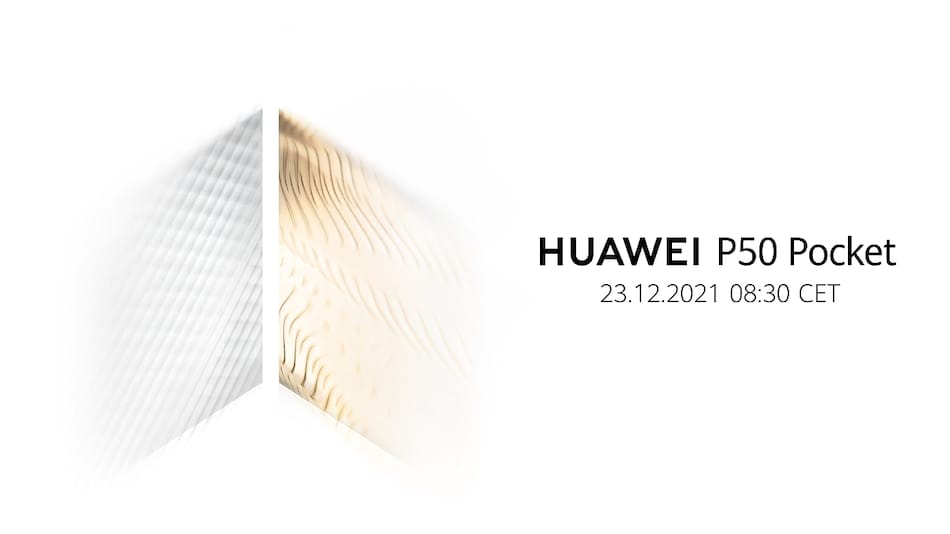 Huawei P50 Pocket foldable smartphone is set to launch on December 23, the company confirmed on Tuesday. Huawei's upcoming handset could come in two colour options, based on the teaser shared by the company today. While Huawei is yet to officially announce details including the smartphone's specifications, the teaser suggests it could come with a familiar vertical folding design. According to previous reports, the company has been working on a smartphone which could be called Huawei Mate V.

The company tweeted the teaser earlier today, with an image of two gold and silver panels placed at angles alongside the text "Huawei P50 Pocket" with the December 23 launch date. The upcoming foldable smartphone is expected to launch at 8:30am CET (1:00pm IST), according to the image shared by Huawei.

While few details of the smartphone's specifications are currently available, the smartphone was tipped to launch with the Kirin 9000 SoC in China, dubbed Huawei Mate V, suggesting it could be a 4G smartphone. The global variant, according to a report by XDA Developers, could sport the Snapdragon 888 SoC under the hood. The device is also said to come with a 6.7-inch screen and could feature the vertical folding design of the Samsung Galaxy Z Flip 3.

However, Huawei P50 Pocket isn't the only smartphone expected to be launched by the company in the near future. According to an older report, the company is also set to launch Huawei Watch D, the company's first wearable to support blood pressure monitoring on December 23. The smartwatch could feature a square design with dedicated buttons, including home and health, and could come with support for electrocardiogram measurement. However, the company is yet to announce details of the smartwatch, including price and specifications.