Huawei P40-series launch will begin through a livestream at 6:30pm IST today. 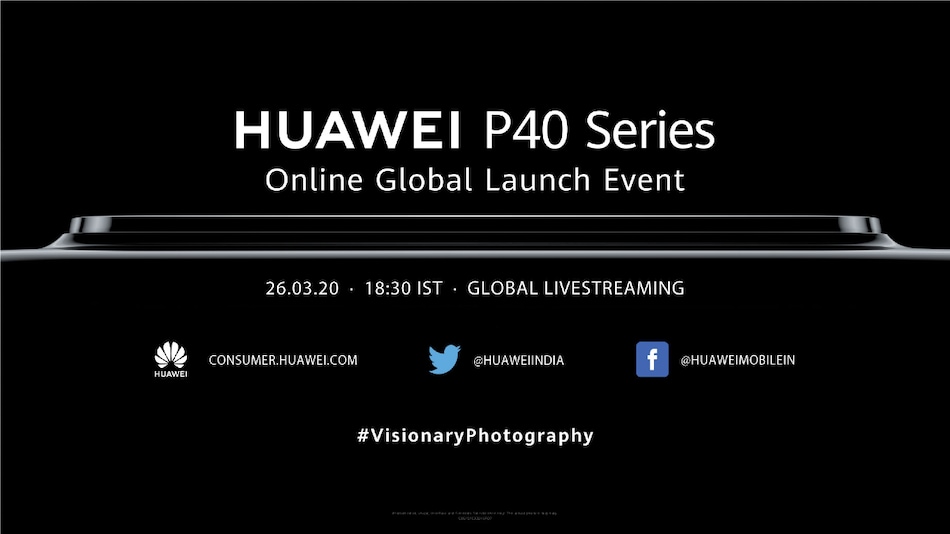 Huawei P40 series is set to launch at an online-only event. The launch is expected to bring the Huawei P40 and Huawei P40 Pro. Some recent rumours have also suggested that the Chinese company would also unveil the Huawei P40 Pro+ at its event. All three new Huawei phones are speculated to have a pill-shaped hole-punch display and include a multi-camera setup at the back. The phones would also have a gradient rear panel in multiple colour options. The Huawei P40 series will come as the successor to the P30 family that was launched in March last year. Read on for launch details, expected price, and rumoured specifications of the new smartphones.

The Huawei P40-series launch will take place through a live stream that will be available on the company's official website. The livestream will begin at 6:30pm IST today. In addition to the regular Huawei P40, you can expect the Huawei P40 Pro and the Huawei P40 Pro+. The company may also announce its new plans to expand the Huawei App Gallery that competes against Google Play.

The Huawei P40 is expected to run Android 10 out-of-the-box with an Huawei Mobile Services (HMS) powered experience on top. The phone would feature a 6.1-inch full-HD+ display and powered by an octa-core HiSilicon Kirin 990 SoC, paired with at least 8GB of RAM. It is also rumoured with a triple rear camera setup that could be called Leica Ultra Vision Triple Cam, comprising a 50-megapixel Sony sensor, 16-megapixel secondary sensor, and an 8-megapixel tertiary sensor. For selfies, there is likely to be a 32-megapixel single selfie camera at the front.

Recent reports suggest that the Huawei P40 would come in only 128GB of onboard storage and have NanoMemory-2 card support for expanding the built-in storage. It would also include a 3,800mAh battery with support for 22.5W fast charging.

Unlike the P40, the Huawei P40 Pro would come with a 6.58-inch full-HD+ (1,200x2,640 pixels) AMOLED display along with 90Hz refresh rate support. The smartphone is also rumoured to have an octa-core Kirin 990 SoC, paired with 8GB of RAM. It would come with a quad rear camera setup with a 50-megapixel UltraVision primary sensor, 40-megapixel secondary sensor, 12-megapixel tertiary sensor, and a 3D time-of-flight (ToF) depth sensor. In terms of selfies, the phone is said to have a 32-megapixel primary sensor at the front -- along with a depth sensor. It would enable 50X SuperSensing Zoom.

The Huawei P40 Pro will have 128GB, 256GB, and 512GB of onboard storage options, according to the reports. It is also rumoured to have NanoMemory-2 standard memory card support. Besides, the phone would include a 4,200mAh battery with 40W fast charging and wireless charging support.

The Huawei P40 Pro+ specifications are majorly unknown. Nevertheless, the phone could come with the same Kirin 990 SoC that would power the Huawei P40 and Huawei P40 Pro. It is also likely to have up to 512GB of internal storage options and fast charging support.