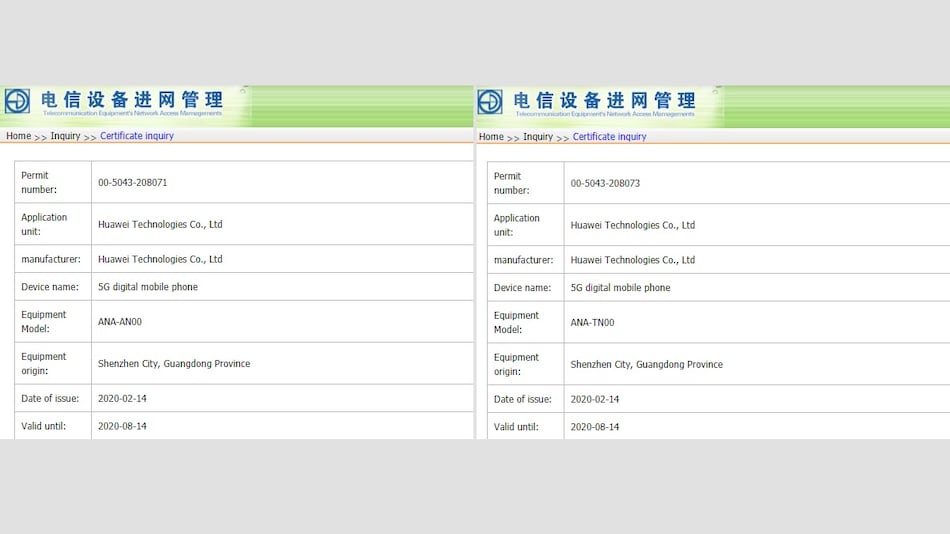 Huawei P40 series is said to go official in March

Huawei's upcoming P40 and P40 Pro flagship phones are tipped to debut next month going by the company's launch cycle. After appearing in leaked renders and live images, the Huawei P40-series phones have now been certified in China. The two phones carrying the model numbers ANA-AN00/ANA-TN00 (for the Huawei P40) and ELS-AN00/ELS-TN00 (for the Huawei P40 Pro) have received the mandatory TENAA certification in China. The listings don't reveal much about the two phones, except support for 5G and dual-SIM cards.

The TENAA listing of the vanilla Huawei P40 reveals the model numbers ANA-AN00 and ANA-TN00. As for the Huawei P40 Pro, two separate listings for the ELS-AN00 and ELS-TN00 variants have been spotted on TENAA as well. However, the phones' TENAA listings have not been updated with photos or specifications yet. Still, the listings, as mentioned, note that the two phones will support 5G and come with dual-SIM card slots. The phones are also confirmed to run on Android, however there is no word on whether Google Services will make their way to the two phone or the buyers will be stuck with Huawei Mobile Services.

As per a recent leak, the Huawei P40 and its pro variant will pack a quad rear camera setup. However, the Huawei P40 Pro will up the ante with a periscope-style camera module that has a rectangular lens and will reportedly bring 10x optical zoom support to the table. The Huawei Pro Premium Edition will add yet another lens and will ship with a penta rear camera setup. An alleged live image of the Huawei P40 Pro suggests it will feature a pill-shaped hole-punch housing dual selfie cameras. Moreover, it is tipped to pack a custom Sony-made 52-megapixel camera with 1/1.33-inch sensor size.