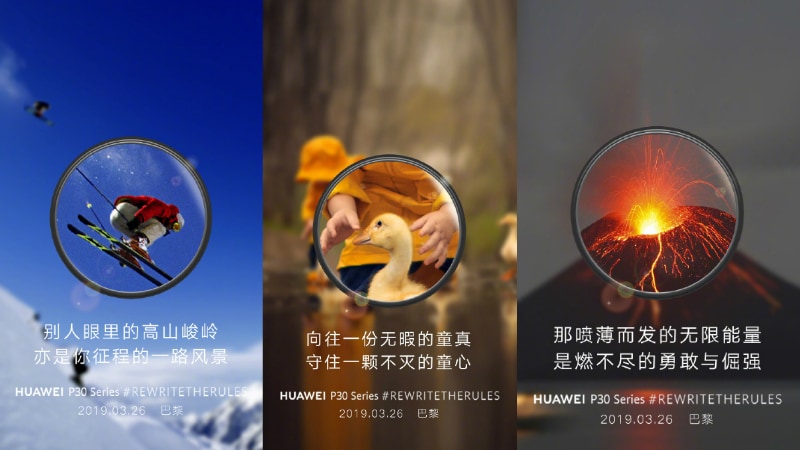 Huawei P30 teaser photos recently hinted at the phone's super zoom capabilities. The macro shots, at face value, were quite impressive and were seen to not lose any detail. However, now it's come to light that the photos were in fact taken from a DSLR, and not the Huawei P30. One of the photos was taken from a photographer's portfolio and one was sourced from Getty Images. This unethical practice by Huawei for a marketing campaign for the P30 series is in bad taste, and undermines the phone's actual photo-taking skills. After the outrage over the photos, Huawei has responded saying the photos were not intended to highlight the phone's camera capabilities. Unfortunately, this is not the first time that Huawei has been caught using a DSLR to misrepresent smartphone sample photos, with the company causing controversy when it posted fake Nova 3 selfies.

These fake photos passed off as taken from the Huawei P30 series shows the company in bad light, and it was spotted by GSMArena. The volcano image was taken from Getty Images, and the kid playing with ducks photo was taken from a photographer named Jake Olson's portfolio. It is quite possible that the company bought copyrights of the photos used in the teaser campaign, and didn't outright steal them, but it still isn't an exact representation of what the photos will look like if taken from the Huawei P30.

In a statement to Gadgets 360, Huawei said, “We have been made aware that there might have been some misunderstanding regarding our recent P30 Series teaser posters. We would like to reiterate that those are, in fact, only teaser posters, and are only intended to hint at the unique new features that will come with the Huawei P30 Series. Huawei has acquired the licenses to the original images and the posters are artistic renditions of said features only."

Huawei was caught up in a similar controversy last year when it used a DSLR misrepresent them as Nova 3 sample photos. Back then, Sarah Elshamy, one of the actors in the ad, posted photos on her Instagram page, and one image revealed a photographer shooting the "at-home selfie with a DSLR".

The Huawei P30 series is tipped to come with a quad camera setup, a periscope lens and optical and hybrid zoom capabilities. Huawei has been teasing macro shots capabilities since a while now, and the latest teaser did just that. One would assume that an OEM would use the photos taken from the phone for the campaign, ahead of the launch, but that isn't the case with Huawei.

Huawei had recently even shared a photo of the moon, claiming that it was taken from the Huawei P30, and the details of the moon suggested an upgrade in zooming capabilities. Huawei's VP of Global Product Marketing, Clement Wong says that the photo was taken on-device, handheld, with no additional help.

Previous rumours suggest that the Huawei P30 and P30 Pro smartphones will sport OLED screens with a waterdrop-style notch and optical in-display fingerprint sensors. The Huawei P30 is said to have a maximum of 40-megapixel and support for 5x lossless zoom. At the front, it is expected to have a 24-megapixel selfie camera. The phones will also reportedly be powered by HiSilicon Kirin 980 SoC. The Huawei P30 is said to be coming with a 6.1-inch OLED panel with 8GB of RAM, whereas the Huawei P30 Pro will feature a larger 6.5-inch display with 12GB of RAM.