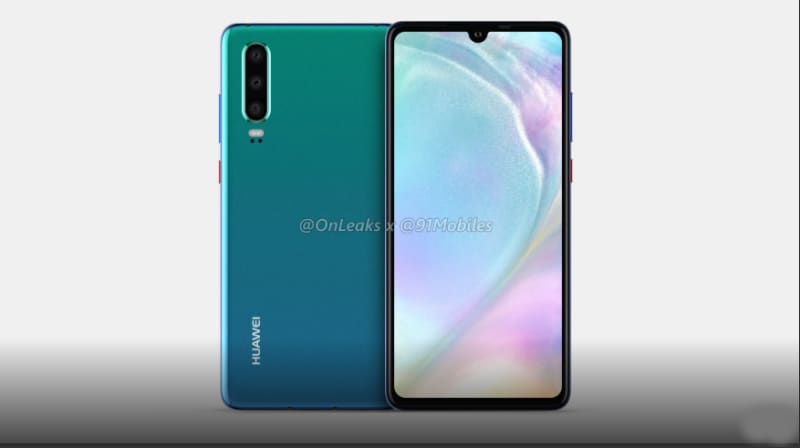 Huawei's P30 series is one of the anticipated Android flagships of this year, and is slated to release in the fast half of 2019, most probably at MWC 2019. The Huawei P30 has now surfaced in leak-based concept renders and video, and it shows the smartphone from all angles. The smartphone is seen to sport a triple rear camera setup, a waterdrop-shaped notch, and a textured gradient back panel. Another interesting titbit these renders reveal, is the reincarnation of the 3.5mm audio jack on the Huawei P30.

The Huawei P30 renders have been leaked by OnLeaks and 91Mobiles, and it shows that the smartphone sporting a 3.5mm audio jack at the bottom edge, right next to the USB Type-C port and the speaker grille. If true, this would be an interesting turnaround by Huawei, as it didn't include the 3.5mm audio jack on the Huawei P20 series. The bringing back of the audio jack has not been done by any OEM that has decided to do away with it, and therefore this leak should be taken with a grain of salt.

In any case, the Huawei P30 renders suggest that the smartphone will sport a waterdrop-shaped notch up front, and a slight chin at the bottom as well. At the back, the previously leaked triple camera setup is seen stacked vertically with the dual-LED flash sitting beneath all the sensors. The back panel seems to be textured and sports a gradient finish as well. The volume and power buttons are located on the right edge of the smartphone, and as mentioned, the 3.5mm audio jack, the USB Type-C port, and the speaker grille is situated at the bottom edge of the phone. There's no sight of a fingerprint sensor at the back, so we presume it to be underneath the display.

The report states that the dimensions measure at 149.1x71.4x7.5mm, and with the camera bump, the thickness increases to 9.3mm. The display size is reportedly at 6-inches, and the smartphone is expected to be powered by the HiSilicon Kirin 980 SoC, pack 4,000mAh battery, and run on Android Pie.

Previous rumours suggest that the Huawei P30 is tipped to sport a maximum of 40-megapixel sensor, and support 5x lossless zoom. At the front, there is expected to be a 24-megapixel selfie camera as well.