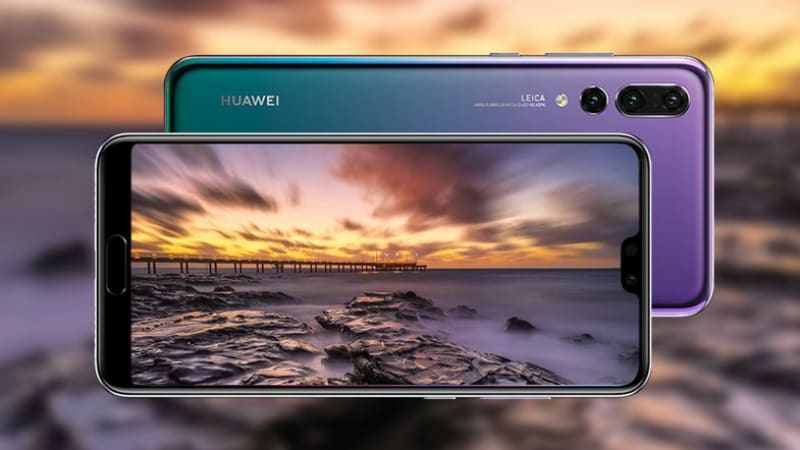 Huawei P20 Pro flagship smartphone with triple-rear camera setup will be launched in India today at an event the company is hosting in New Delhi at 11:30am. It will be unveiled in the country alongside the Huawei P20 Lite, but it doesn’t seem the Huawei P20 will be arriving in the country as it has been missing from the teasers. The new Huawei P20 Pro and P20 Lite were originally showcased globally in March, following which it was confirmed they will launch in India “soon.” The dedicated listing page on Amazon India for the Huawei P20 Pro and P20 Lite shows the duo will be exclusively available via the e-commerce platform.

We will have to wait for the launch event to find out the official Huawei P20 Pro price in India, though it is likely to be right up there with the prices of Samsung Galaxy S9, iPhone 8, etc. Same goes for the P20 Lite smartphone, which is a more affordable device and will likely be positioned against the likes of Vivo V9 and Oppo F5. For those curious, the two new Huawei models cost EUR 899 (roughly Rs. 72,300) and EUR 369 (about Rs. 29,500), respectively.

The Huawei P20 Pro runs EMUI 8.1 based on Android 8.1 Oreo, with support for Google ARCore and a deeply customised Google Assistant. It is powered by the octa-core Huawei HiSilicon Kirin 970 SoC (four Cortex-A73 cores clocked at 2.36GHz and four Cortex-A53 cores clocked at 1.8GHz) complete with a dedicated NPU (neural processing unit). The NPU provides the AI chops to the phone, and is also said to provide up to 60 percent better system response speed, and up to 50 percent smoother operation. It also offers AI-based noise removal on call. The handset has 6GB RAM, and 128GB of inbuilt storage. It comes with a 360-degree Face Unlock feature, said to unlock the smartphones in as little as 0.6 seconds.

The Huawei P20 Pro sports a 6.1-inch full-HD+ (1080x2240 pixels) OLED FullView display, said to have a 1:1,000,000 contrast ratio and a 105 percent colour gamut. It is said to have 'natural tone displays', comfortable for all light conditions. It also sports a home button that supports 'edgeless fingerprint'. There is also gesture support on the home button, such as short tap for back, long tap for home, and swiping left or right for multi-tasking. Huawei claims the handset has thinner bezels than the iPhone X and a smaller notch design.

P20 Pro has IP67 rating for dust and water resistance, and is powered by a 4000mAh battery despite being just 7.8mm thick, providing up to 89 hours of music playback. The battery supports Huawei SuperCharge fast charging that is said to deliver 58 percent in just 30 minutes. It is also said to be a safe fast charging method.

Coming to its highlight, the triple rear camera setup of the Huawei P20 Pro. The topmost lens bears an 8-megapixel sensor with 3x optical zoom thanks to its Leica telephoto lens (VARIO-SUMMILUX-H 1:1.6-2.4/27-80ASPH). The second, bears a 40-megapixel RGB 1/1.7-inch sensor, while the third bears a 20-megapixel monochrome sensor. Between the larger lenses, lie a laser transmitter and receiver, for quicker autofocus, as well as a Leica colour temperature sensor. The camera has a light sensitivity up to ISO 102400 — the same as the Canon 5D Mark IV, the company says. It is also touting the most powerful zoom on a smartphone, as apart from 3x optical zoom, the P20 Pro offers 5x lossless hybrid zoom, and 10x digital zoom. On the front, the Huawei P20 sports a 24.8-megapixel camera. The company is touting front camera features that help take better selfies. The smartphone also comes with a 3D portrait lighting effect.

The P20 Pro offers 4D Predictive Focus, said to provide instant focus with motion prediction, providing nearly 'zero shutter lag', Huawei said. The smartphone supports 6-axis stabilisation and 960fps super slow motion video recording. The company has also ensured that you can get to the camera as fast as possible, going from "screen-off to shoot" in as little as 0.3 seconds. It also offers 'Master AI' scene recognition, with the company boasting of recognition for over 500 scenarios in 19 categories. There is also AI-Assisted Composition, to help with things like alignment and framing.

As for the mid-ranger Huawei P20 Lite, the phone sports a 5.84-inch full-HD+ (1080x2280 pixels) FullView 19:9 display, a HiSilicon Kirin 659 SoC, 4GB of RAM, and 64GB inbuilt storage. It has a vertically aligned dual camera setup on the back, with a 16-megapixel primary sensor and a 2-megapixel secondary sensor. In the international markets, it comes with a 16-megapixel selfie camera, but the India variant will sport a 24-megapixel sensor in front. The P20 Lite will get a 3000mAh battery, NFC support, face recognition, and EMUI 8.0 running on top of Android Oreo.