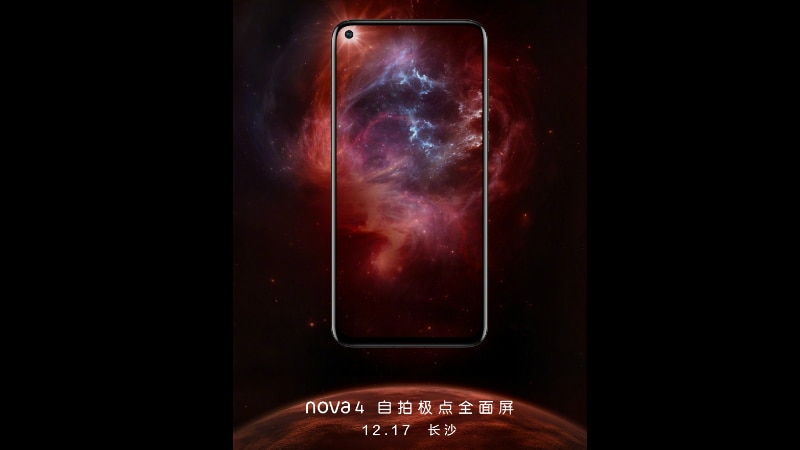 In a bid to take on Samsung's rumoured Galaxy A8s, Huawei was rumoured to be working on a smartphone with a similar design. Touted to be called the Nova 4, the smartphone is said to come with a display hole for the selfie camera. Now, the company has confirmed that the Huawei Nova 4 will be launched on December 17 in China. Alongside the announcement, the company has published a poster that has the outline of the phone showing off the the pin-hole camera in the front.

Huawei has taken to Weibo to announce that the Huawei Nova 4 will launch on December 17. The smartphone will launch in China, and it will sport a true bezel-less display with no notch. For the front camera, there will be a slight hole in the screen, on the top left edge, where the sensor will be located.

Concept render leaked by Ben Geskin a few days ago suggest that the smartphone will sport a triple vertical camera setup, and a gradient back panel finish. Expected specs include the latest Kirin 980 SoC, 6GB RAM, 128GB storage, an in-display fingerprint sensor, and will run on Android 9 Pie out-of-the-box.

To recall, Samsung is also expected to launch its Galaxy A8s in December, and the leaked renders of the smartphone suggest that it will also sport a display with a small cut out for the selfie camera. Samsung announced its new display plans back at SDC, with the Infinity-O type display featuring the hole design.

Huawei looks to compete with Samsung by launching a new smartphone with the same design as the rumoured Galaxy A8s. While Huawei has confirmed that the smartphone will launch on December 17, Samsung is yet to announce a launch date for its Galaxy A8s.