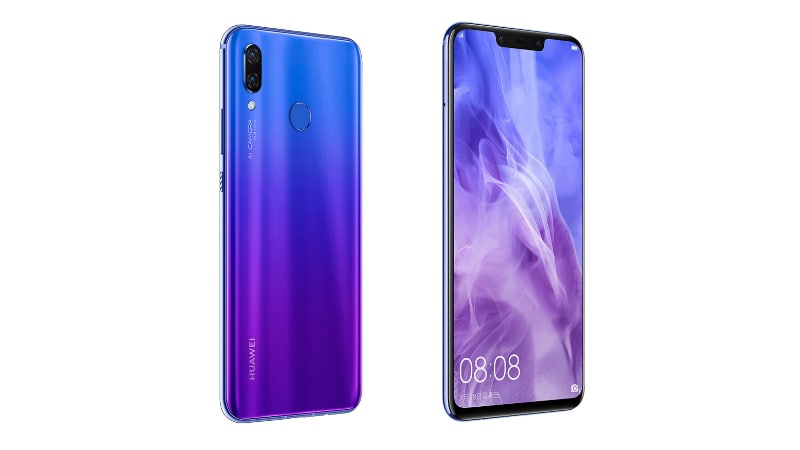 Huawei Nova 3 has been launched in China as the newest Nova-Series model. The smartphone is powered by a HiSilicon Kirin 970 SoC and supports Huawei's GPU Turbo out-of-the-box. It also runs Android 8.1 Oreo with EMUI 8.2 on top and sports an artificial intelligence (AI) powered dual rear camera setup that is claimed to be capable of detecting over 500 scenes. Huawei has also unveiled the TalkBand B5 that comes as the successor to the TalkBand B3 fitness tracker that was launched back in April 2016. Similar to its predecessor, the new fitness band doubles as a Bluetooth earpiece and let users attend voice calls or listen to music while on the go. The wearable offers 24-hour heart rate monitoring using Huawei TruRelax Technology.

The Huawei Nova 3 and TalkBand B5 are currently available for pre-orders through Vmall in China. Details about the prices of the two new offerings will be announced on July 18 and the devices will go on sale starting July 20. While the Nova 3 comes in Purple, Black, Blue, and Gold colour options, the TalkBand B5 will go on sale in Sports Edition with strap in Ash, Black, and Brown colour options and in Business Edition with a metal strap.

For storing content, the Huawei Nova 3 has 64GB and 128GB storage options that both are expandable via microSD card (up to 256GB). The smartphone has 4G VoLTE, Wi-Fi 802.11ac, Bluetooth v4.2, GPS/ A-GPS, USB Type-C, and a 3.5mm headphone jack for connectivity. It also includes a fingerprint sensor at the back and supports a Face Unlock feature as well. Besides, the smartphone packs a 3750mAh battery and measures 157x73.7x7.3mm.

The Huawei TalkBand B5 comes with an IP67-certified dust- and water-resistant build. There is a 1.13-inch AMOLED display with a 2.5D curved glass protection. The display is notably 2.4 times bigger than what was available on its predecessor, the company says. Further, the pop-up display doubles as a Bluetooth headset and is powered by a trip-core audio chip and high-definition voice support that uses the built-in dual microphone setup along with noise reduction to enable an enhanced voice calling experience. The available display panel offers caller ID support and lets users easily make calls using a preloaded speed dial option. Likewise, users can view their call history and mute any voice calls directly from the TalkBand B5. The band requires Huawei EMUI 4.1 to enable the caller ID and call mute functionality.

Huawei TalkBand B5 doubles as a Bluetooth headset

Huawei TalkBand B5 in Sports Edition and Business Edition

The Huawei TalkBand B5 also provides features such as sports goal setting, a sedentary reminder as well as a real-time message reminder and smart alarm clock. It packs a 108mAh battery that is rated to deliver up to six hours of talk time or up to 3.5 days of battery life on a single charge. While the TalkBand B5 measures 58.2x23.3x12.9mm and weighs 40 grams, the headset unit measures 44.1x20x11.9mm and weighs 14.3 grams.

As Technology Advances, Women Are Left Behind in Digital Divide
Amazon Workers in Spain Call 3-Day Strike Over Wages, Rights