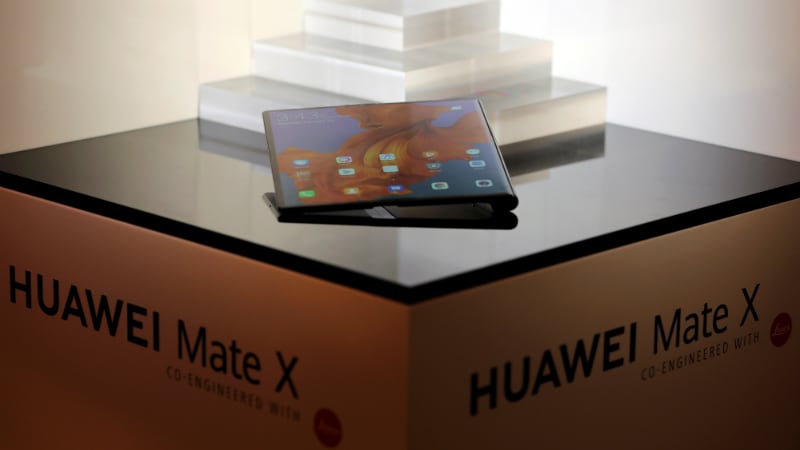 Huawei's first foldable 5G smartphone is here. The new Huawei Mate X was formally announced at a pre-MWC conference in Barcelona. The Huawei phone has an OLED FullView Display panel on the outer body that helps transform the hardware into an 8-inch tablet. Huawei has also provided a two-in-one camera that is powered by Leica optics. Additionally, the Huawei Mate X comes with 5G support to deliver high-speed data access with low latency -- powered by HiSilicon Kirin 980 SoC. The new model notably competes with the Samsung Galaxy Fold that debuted earlier this week with an Infinity Flex Display. Huawei offers a Falcon Wing Design and a FullView Display experience -- without a display notch -- to counter the Samsung model. Apart from these two manufacturers, Xiaomi, Oppo, and others are also said to be working on foldable phones.

The Huawei Mate X price globally has been set at EUR 2,299 (roughly Rs. 2,09,400) for the 8GB RAM/ 512GB storage variant. The smartphone will go on sale from the middle of 2019. It comes in a single Interstellar Blue colour option initially. Huawei has also brought a Full Protection Case that protects the phone to some extent.

Huawei is primarily giving the Mate X to different carriers for 5G testing. Also, the company at its pre-MWC conference revealed that it is bringing a 5G variant of the Mate 20X.

The dual-SIM (Nano) Huawei Mate X runs Android 9 Pie on top of EMUI 9.1.1 and features a single FullView Display panel that folds in 6.6-inch and 6.38-inch sizes and brings an 8-inch OLED FullView Display panel when unfolded -- without any display notch. The device, when folded, offers a 6.6-inch display experience at the front with a pixel count of 1148x2480 pixels and 19.5:9 aspect ratio.

The frontal display area of the Huawei Mate X is touted to be fine enough for one-hand operations. However, Huawei at its conference showcased that the 6.6-inch display area of the phone is larger than what the iPhone XS Max and the arch-rival Samsung Galaxy Fold offers.

"With Huawei Mate X, we bring the future of design and the future of technology," Richard Yu, CEO, Huawei Consumer Business Group, at the pre-MWC conference.

Huawei claims that the Mate X has a patented hinge design with over 100 components. To bring the new foldable design, Yu at the conference mentioned that Huawei's engineers took three years.

Under the hood, the Huawei Mate X has a HiSilicon Kirin 980 SoC, coupled with 8GB RAM. There is also the Huawei Balong 5000 5G chipset that comes as the world's first 7nm modem, capable of delivering up to 4.6/ 2.5Gbps downlink/ uplink speeds on Sub-6GHz. On mmWave, the chipset can deliver up to 6.5/ 3.5Gbps downlink/ uplink speeds. There is also a quad 5G antenna on the handset. Moreover, Huawei claimed that the Mate X is capable of supporting not just the initial NSA network architecture but also the SA architecture that would debut in the future.

For photos and videos, the Huawei Mate X sports a two-in-one front and rear camera setup that is powered by Leica optics. The camera setup includes three sensors, including a 40-megapixel sensor (wide-angle lens), 16-megapixel (ultra-wide-angle lens), and an 8-megapixel sensor (telephoto). The phone also has a mirror shooting mode that lets users show the preview of what they're capturing to others, thanks to the rear display panel.

The Huawei Mate X has 512GB of onboard storage that is expandable via microSD card (up to 256GB). Connectivity options include 5G, Wi-Fi 802.11ac, Bluetooth v5.0, GPS/ A-GPS, NFC, and a USB Type-C port. Also, the phone packs two battery packs that jointly offer 4,500mAh of capacity. There is 55W Huawei SuperCharge technology that is rated to deliver 85 percent of power in 30 minutes of charge.