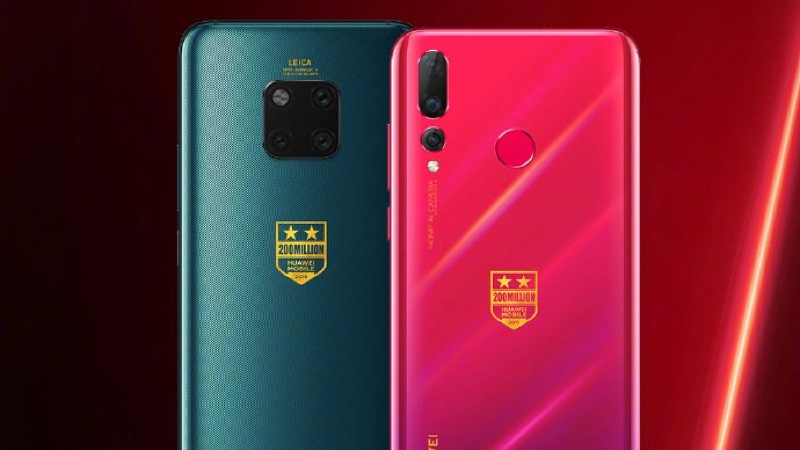 Huawei has had a great year with its smartphone sales hitting the 200-million mark in 2018. Reaching the milestone has helped the company overtake Apple to become the world's second largest smartphone seller in the world with a global market share of 14.6 percent, according to International Data Corporation (IDC). To celebrate the achievement, Huawei has announced commemorative editions of the Huawei Mate 20 Pro and Huawei Nova 4.

He Gang, the president of Huawei's smartphone business, made the announcement via his verified official Weibo account. He also shared an official poster, revealing the design of these special edition phones. In his post, Gang said, "This is a new starting point and we will continue to work hard to improve our products and services to achieve higher shipments in the future."

The Huawei Mate 20 Pro Commemorative Edition will come in Emerald colour with 8GB RAM and 256GB inbuilt storage. Meanwhile, the Huawei Nova 4 Commemorative will feature 8GB RAM and 128GB inbuilt storage and will be available in a 'Secret Red' colour. The phones feature a special logo at the back with '200 Million Huawei Mobile 2018' imprinted on it.

Both the phones will go on sale in China from January 1, 2019. Huawei hasn't revealed the exact prices of these special edition phones yet.

While Huawei has managed to ship an impressive number of smartphones this year, the company has spent the larger part of the year in the middle of controversies. The company's chief financial officer, Meng Wanzhou, was arrested in Canada in December this year after the US government forwarded a request. The company's alleged ties with the Chinese government have also been a source of consternation for US and its allied nations, who warn against using Huawei devices and networks.

To recall, the Huawei Mate 20 Pro went on sale in India earlier this month. The phone is priced at Rs. 69,990 in India for the 6GB RAM, 128GB storage variant. The Huawei Nova 4 is yet to launch in India though. The phone was launched in China this month itself. It's unclear whether Huawei will bring its special edition phones to India.

Is Huawei Mate 20 Pro the best Android phone out there? We discussed this on Orbital, our weekly technology podcast, which you can subscribe to via Apple Podcasts or RSS, download the episode, or just hit the play button below.