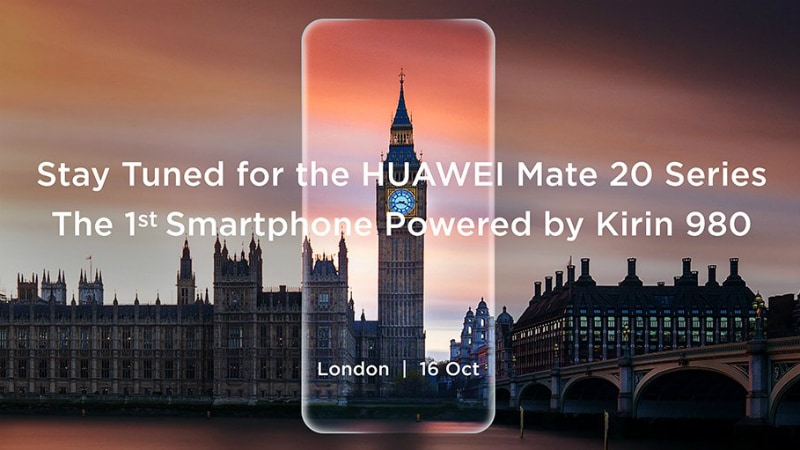 After some initial rumours, Huawei Mate 20 and Mate 20 Pro are now officially debuting at an event in London on October 16. Both new Huawei models will have the newly announced Kirin 980 SoC that arrived at IFA 2018 last week. Notably, the launch date of the Huawei Mate 20-Series matches the Mate 10-Series that was launched on October 16 last year. Huawei at the ongoing IFA announced EMUI 9.0 as the new update of its proprietary interface. The new EMUI version is based on Android 9.0 Pie and is claimed to deliver a faster experience. EMUI 9.0 is currently on beta and is open for registration to European Huawei device users.

Huawei has confirmed the launch event of the Mate 20 and Mate 20 Pro in a tweet posted through its official Twitter account. The tweet carries an image that highlights the presence of the 7nm Kirin 980 SoC that is equipped with artificial intelligence (AI) capabilities and comes along with a Mali-G76 GPU. If we look at a recent report, the Mate 20 and Mate 20 Pro both will have a display notch design and run Android Pie-based EMUI 9.0 out-of-the-box. While the Huawei Mate 20 Pro is rumoured to have an in-display fingerprint sensor, the Mate 20 is likely to include a traditional fingerprint sensor. The Mate 20 is also reported to have a 4,200mAh battery which is larger in capacity over the 4,000mAh battery available on the Huawei P20 Pro. The handset could also have a glass back construction to support wireless charging. In contrast, the Huawei Mate 20 Pro could come with a triple camera setup, similar to the P20 Pro.

The Huawei Mate 20-Series could have multiple variants with model number HMA-AL00, HMA-L09, HMA-L29, and HMA-TL00. Interestingly, Huawei already brought the Mate 20 Lite as the first model in the new lineup to expand its portfolio. The Mate 20 Lite doesn't have the top-end SoC and the latest Android experience. It instead comes with the Kirin 710 SoC and runs EMUI based on Android 8.1 Oreo.

In addition to revealing the launch date of the Mate 20 and Mate 20 Pro, Huawei has announced EMUI 9.0 as its newest custom Android skin. The new version is powered by Android 9.0 Pie. It is touted to perform 12.9 percent faster than its predecessors - capable of launching Instagram 12 percent faster and Spotify 11 percent faster than the previous EMUI version. Further, EMUI 9.0 comes with GPU Turbo 2.0 that is designed to optimise intensive workloads and give an on-demand performance boost to the devices while reducing power consumption. The new graphics processing acceleration technology is also claimed to improve the user experience by uplifting touchscreen responsiveness and network connectivity. Also, there is an Uninterrupted Gaming mode to meet the needs of mobile gamers.

Using onboard AI capabilities, EMUI 9.0 brings HiVision that enables the camera app to recognise major landmarks, paintings, and structures surrounding the environment and provide users with the relevant information using a layer of augmented reality. EMUI 9.0 additionally includes a new Password Vault that helps users store their encrypted password with face or fingerprint for various services. Plus, there is a new Digital Balance dashboard that allows users to track device usage metrics and let them set the usage quota for each app. The proprietary skin also has a Wind Down feature to help users relax before heading to bed. Standard Android Pie features are also available through the latest EMUI version.

EMUI 9.0 is currently on beta and is open to European Huawei devices. The list of devices supporting EMUI 9.0 beta includes Huawei Mate 10, Mate 10 Pro, P20, and P20 Pro as well as Huawei sub-brand Honor backed Honor 10, Honor View 10, and Honor Play. Huawei hasn't specified which European markets will first receive the update. However, users need to go to Huawei's Friendly User Test page and then download the Huawei Beta app on their devices. After that, they need to accept the terms and conditions on the Huawei Beta app to proceed for the signup process to test the beta version. Once the terms and conditions are accepted, go to Personal > Join Project and select the EMUI 9 beta programme and then hit the Sign Up button.

Users who have signed up for the beta programme in the supported markets will receive EMUI 9.0 through an OTA (over-the-air) update.