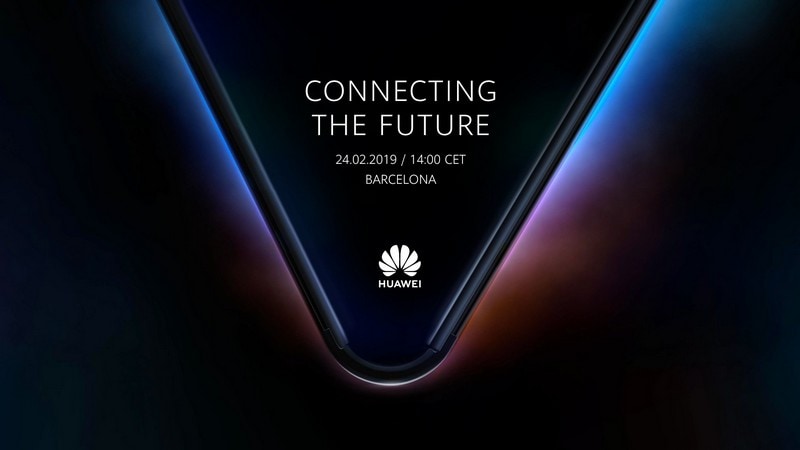 Huawei had earlier confirmed that the company was working on a foldable 5G smartphone, and soon after, announced it would be launched at MWC 2019. The Chinese smartphone maker has now shared a press invite on Twitter for an event at 2pm CET (6:30pm IST) February 24, 2019 in Barcelona, just a day before MWC 2019 kicks off, and four days after Samsung's own Galaxy Unpacked event. The invite image depicts what appears to be a foldable smartphone's hinge, giving us a slight hint as to its design.

The press invite, that was shared by the official Huawei Mobile Twitter handle, shows the silhouette of a foldable smartphone's hinge and leaves little scope of doubt regarding the product Huawei is expected to launch at the event on February 24, 2019 in Barcelona. Earlier this month, Huawei announced plans to launch what the company calls the first foldable fifth-generation smartphone at MWC 2019 later this month. The Chinese smartphone maker's foldable smartphone is expected to come equipped with the in-house HiSilicon Kirin 980 SoC and the Balong 5000 modem.

Rumours of Huawei allegedly working on a foldable smartphone emerged for the first time in the fourth quarter of 2017, followed by another report which claimed that Huawei aims to one-up Samsung by launching a foldable smartphone before the Korean giant. But it appears that Samsung will take the cake here, as the company has already scheduled a Galaxy Unpacked event on February 20 where it is expected to launch the Galaxy S10 series alongside the foldable Galaxy smartphone.

Coming back to Huawei's upcoming foldable 5G offering, it will reportedly feature a 7.2-inch display. Huawei will reportedly manufacture between 24,000 and 30,000 units of the upcoming smartphone in the initial phase, however, it is not known in what markets it will eventually arrive. Huawei's announcement is still a few weeks away, but with companies like Samsung, LG and Xiaomi throwing their hat in the foldable smartphone segment, 2019 appears to be the year when the foldable form factor truly becomes mainstream.