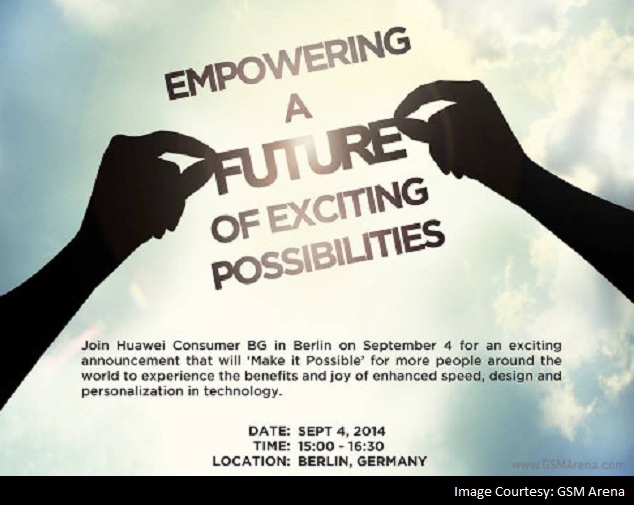 Huawei on Wednesday has sent an invitation (seen alongside) for a pre-IFA 2014 event to be held on September 4 in Berlin, Germany, as well as a teaser (seen below) for its Honor series of smartphones. The company is expected to launch its much-rumoured Ascend Mate 3 phablet at the event, alongside a new Honor-branded smartphone.

The Chinese telecommunications giant's pre-IFA 2014 invitation doesn't give much information as to what the firm will launch. It reads 'A future of exciting possibilities,' along with the date, time and venue for the event, which happens to be just ahead of the start of IFA 2014 on September 5.

"Join Huawei Consumer BG in Berlin on September 4 for an exciting announcement that will 'Make it possible' for more people around the world to experience the benefits and joy of enhanced speed, design and personalization in technology," adds the invitation.

The rumoured Ascend Mate 3 that's expected to be launched at the pre-IFA 2014 event is a phablet that was leaked in an image earlier this week, alongside purported specifications - a 6-inch full-HD display, 2GB of RAM, 16GB of inbuilt storage, LTE connectivity, a 13-megapixel rear camera, a 5-megapixel front-facing camera, and the Android 4.4.2 KitKat.

The Huawei Honor-series teaser seems to be China-centric, with Huawei and Honor logos side-by-side above some Chinese calligraphy, the number '99', and a link to the honor.cn website. The teaser (via Playfuldroid) supposedly partially reveals the price of the teased upcoming Honor handset, with readers asked to guess what the first digit is ahead of '99', allowing them to arrive at the price in Chinese yuan.

The website speculates a CNY 399 (roughly Rs. 3,900) or CNY 499 (roughly Rs. 4,900) price, based on Huawei's willingness to compete with Xiaomi's aggressive pricing. Playfuldroid also speculates that the handset that is being teased for launch is the rumoured Huawei HoI-T00, a yet-to-be-announced smartphone that was spotted on the Tenna website last week. The handset reportedly features a 5-inch HD (720x1280 pixels) display, a 1.3GHz MediaTek MT6582 processor coupled with 1GB of RAM, and a 2-megapixel rear camera.