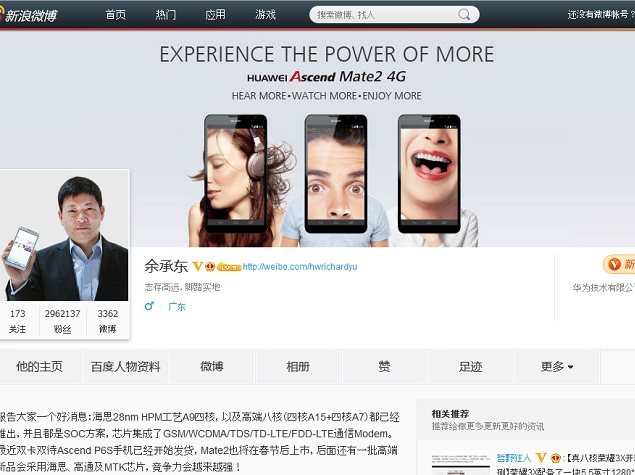 Huawei, a major Chinese mobiles and telecommunications company, just announced three new HPM processors - a quad-core offering, and two octa-core chips, one of which is a 64-bit processor.

The second octa-core chip by Huawei, tipped to be called HiSilicon K3V3 by Engadget, uses ARM's big.LITTLE architecture, featuring a quad-core Cortex A-15 chip and quad-core Cortex A-7 chip. The 28nm chipset will have the A-15 do the heavy work, while the A-7 will be used for lightweight tasks. It is not clear whether all eight cores will be able to run simultaneously as of now.

The quad-core chip announced by Huawei, tipped to be called HiSilicon K3V2 Pro, will be based on ARM Cortex A-9 architecture, and will also be produced using the 28nm manufacturing process. The chip, along with the Cortex-A7 and Cortex A-15 octa-core SoC, would also support GSM/WCDMA/TD-SCDMA/TD-LTE and FDD-LTE modems.

Richard Yu also confirmed that besides having its own chips, Huawei would use chips from MediaTek and Qualcomm for its high-end devices.

It has been also speculated that the firm might introduce its new quad-core and octa-core chips in new smartphones at the upcoming Mobile World Congress 2014 event, which will be held in Barcelona from 24 to 27 February.

The first handset to reach the market incorporating a 64-bit chipset was Apple iPhone 5S. Apple's biggest rival, Samsung, has also announced that it would include a 64-bit chipset in its upcoming Samsung Galaxy S5 smartphone.

Notably, Huawei in November 2013 unveiled what it called the 'world's first true octa-core' mobile processor, the MT6592, which is a heterogeneous computing SoC built on the 28nm HPM process.