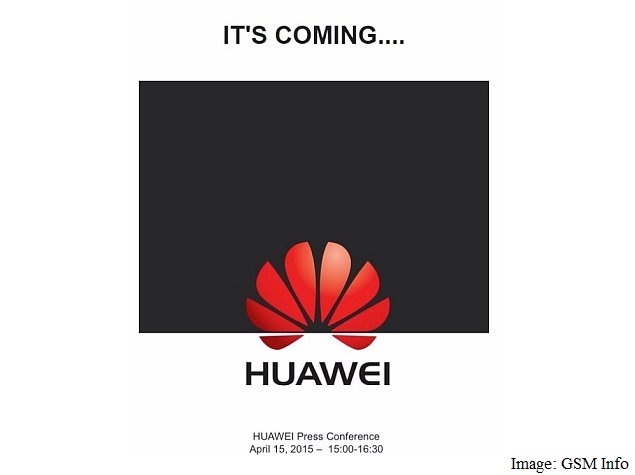 Huawei is reported to have started sending invites for an event on April 15 in London, where the company is expected to launch its next Ascend flagship.

The invite from Huawei doesn't indicate much about the device expected to launch and just says "It's coming" with Huawei's logo on it.

GSMArena reports (via GSM Info) that the Chinese manufacturer is gearing up to introduce the successor to the Huawei Ascend P7, the much-leaked Ascend P8, and also claim that the company has already begun teasing the smartphone in China.

As per the leaked specifications of the smartphone till date, the Huawei Ascend P8 features a 5.2-inch full-HD display; unibody design; dual 13-megapixel rear camera; 3GB of RAM; octa-core Kirin 930 processor; Android 5.0 Lollipop, and a 2600mAh battery. We will have to wait till April 15 to know what the Chinese company has up its sleeves.

To recall, Huawei launched the Ascend P7 in May last year, a single-SIM smartphone running Android 4.4.2 KitKat with the company's Emotion UI 2.3 skin on top.

Earlier this month, a report emerging from China claimed that Huawei will be the next manufacturer of the Nexus phone.

The report claimed that Google tied up with Huawei as the maker of the next Nexus smartphone to be released in the second half of the year. In another report, Huawei was said to be the manufacturer of the cheaper of the two Nexus smartphones Google is planning on releasing this year. Details about the upcoming Nexus handsets are limited as of now.

Huawei's Honor brand is set to expand its smartphone portfolio in India on Tuesday, with the firm teasing the launch of the Huawei Honor 6 Plus alongside budget 4G smartphones. The Chinese handset brand however has not detailed names of the other handsets expected to launch in the country.