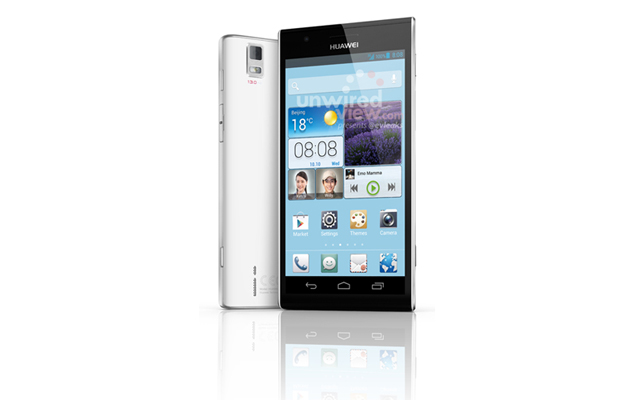 Now a press shot of the company's next full-HD flagship device has surfaced online courtesy @evleaks via Unwired View. The 6.99mm thin Ascend P2 is expected to be unveiled at the Mobile World Congress (MWC) in Barcelona next month.

The company will be using the HiSilicon K3V2 processor featuring a Cortex A9 design and it also plans to use the Cortex-A15 architecture later this year.

The Huawei Ascend P1 LTE was unveiled by Airtel back in November last year as 'India's first 4G smartphone'. It is powered by a 1.5GHz dual-core Qualcomm Snapdragon S4 processor alongside 1GB RAM. It comes with 4.3-inch Super AMOLED qHD display with Gorilla Glass 2, 4GB internal storage (expandable by 32GB) and an 8-megapixel rear camera with dual LED flash. The Ascend P1 LTE runs Android 4.0 and is powered by a 2,000mAh battery.

Huawei also plans to introduce the Ascend W2 at MWC, which will apparently be just 7.7 mm thin. It is likely to come with a 4.5-inch 720p HD ultra-sensitive touchscreen that can be operated with gloves, an 8-megapixel rear camera, a Qualcomm dual-core processor with unspecified clock frequency, 1GB RAM, 16 GB of internal storage and a 2,800 mAh battery.
Comments