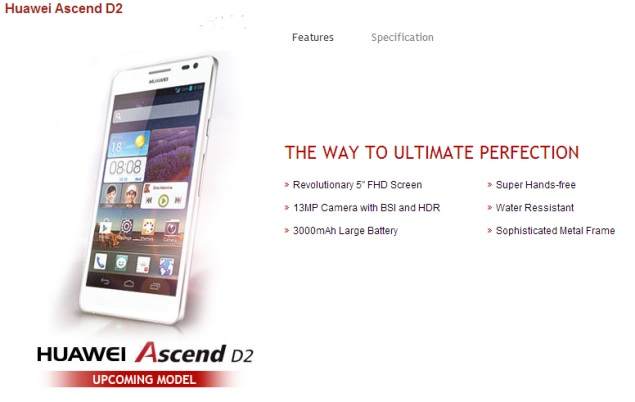 Chinese handset maker, Huawei seems to be gearing up to launch its new smartphones in the Indian market. Huawei's official Indian site now lists two new smartphones, the Ascend D2 and the Ascend W1 with an 'upcoming model' tag.

The Huawei Ascend D2 measures 140x71x9.4mm and weighs around 170 grams. It features a 5-inch full-HD LCD display with a resolution of 1080x1920 pixels and boasts of a pixel density of 443PPI. The display also sports an anti-scratch Corning Gorilla glass on top.

The device is powered by a 1.5GHz quad-core Hi-Silicon K3V2 processor coupled with 2GB of RAM. The Ascend D2 comes with 32GB inbuilt storage and does not support microSD cards. It sports a 13-megapixel auto-focus rear camera with support for HDR and 1080P video recording. It also includes a 1.3-megapixel HD front-facing camera. The device runs Android 4.1 Jelly Bean.

Interestingly, the yet to be announced Huawei Ascend D2 is dust and water resistant with IPX 5/4 certification. Connectivity options include Wi-Fi, Bluetooth, GPS, GPRS, EDGE and 3G. The Ascend D2 is backed by a large 3000mAh battery that the company claims, delivers up to 144 hours of standby time.

The Ascend W1, on the other hand, is a Windows Phone 8 device and features a 4-inch LCD display with a resolution of 480x800 pixels with OGS Technology. The device is powered by a 1.2GHz dual-core Qualcomm Snapdragon S4 MSM8230 processor coupled with 512 MB RAM. It sports a 5-megapixel auto-focus rear camera with LED flash and a 0.3-megapixel front-facing camera. It includes 4GB of internal storage that can be expanded up to 32GB through microSD card. It is backed by a 1950mAh battery. 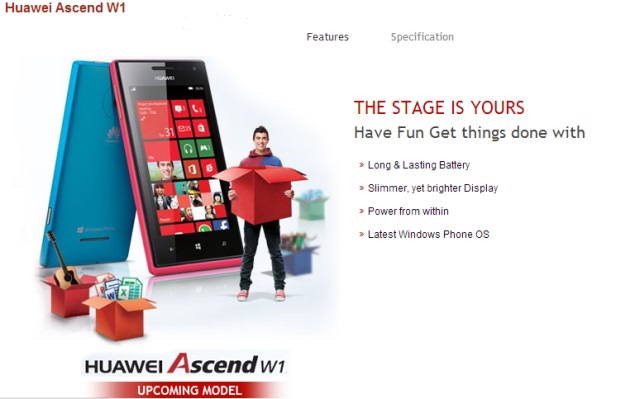 The company has not revealed any specific date for the launch of the Huawei Ascend D2 and Ascend W1 but it can be speculated that the handsets will soon hit the market, looking at the listing.

A few months back the company launched the Ascend Mate for the Indian market at Rs. 24,900.