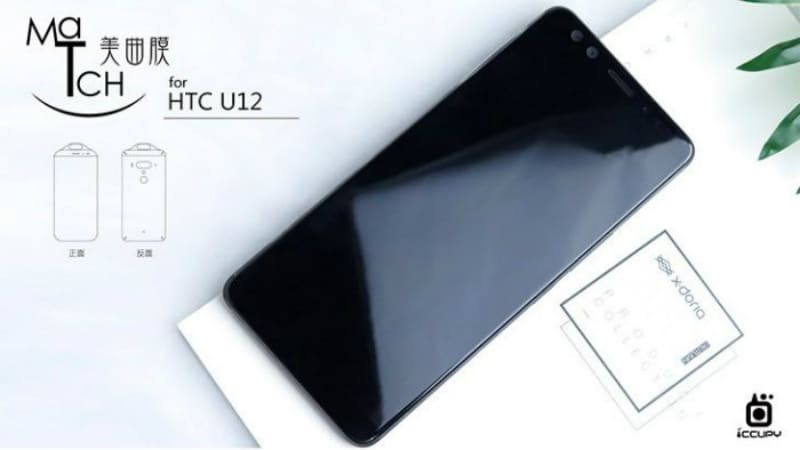 Taiwanese giant HTC hasn't yet launched its flagship smartphone for 2018. With last year's HTC U11 due for an upgrade in the next few weeks, several reports and leaks have surfaced online that give us a look at the upcoming HTC flagship. Just recently, a leak had suggested that HTC's next flagship, codenamed HTC Imagine, would be called the U12+. Recent case renders of the flagship reveal certain elements of its design.

Fresh image renders of the HTC U12+ come courtesy of Yahoo Taiwan showing the smartphone from different angles, Interestingly, the listing suggests the phone will carry the HTC U12 moniker. From the looks of it, the HTC 12+ has a horizontal dual camera setup, an LED flash, a rear-mounted fingerprint sensor, and HTC branding on the back. On the front, the phone seems to have dual selfie cameras with no notch. The phone also appears to have a fullscreen display, possibly with an 18:9 aspect ratio as last seen on HTC's mid-range Desire 12 and Desire 12+, although display dimensions are not mentioned.

In a separate set of leaks from March, reputed tipster Evan Blass had revealed that the HTC U12+ would sport a 5.99-inch QHD+ panel with thin bezels much like the recently launched HTC U11 EYEs. Further, another noted tipster, Llabtoofer, revealed certain specifications of the upcoming flagship. These include a Qualcomm Snapdragon 845 SoC, 6GB of RAM, up to 128GB of internal storage, and a 3420mAh battery.

In terms of optics, the phone is said to feature a 16-megapixel primary and a 12-megapixel secondary sensor at the back. Finally, the report also suggests the HTC U12+ will run HTC Edge UI on top of Android Oreo out-of-the-box.