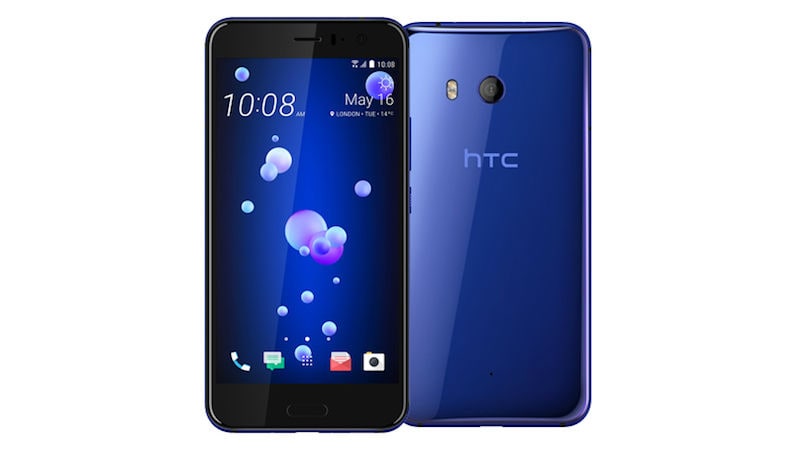 HTC's latest flagship U11 smartphone was launched in India last month and has since been lauded for its design, camera, and performance. One of the many highlights of the smartphone is its glossy back with a liquid metal-like feel that has so far been offered in Silver and Black colours in the country. Now, HTC is bringing a third colour variant with Sapphire Blue, which is now available for pre-orders in India, the company announced via its social media pages. The price of the Sapphire Blue HTC U11 is the same as the other two color options at Rs. 51,990.

The HTC U11 was launched internationally in Amazing Silver, Sapphire Blue, Brilliant Black, Ice White, and Solar Red colour options. Only Amazing Silver, Brilliant Black had so far made it to the Indian market, with Sapphire Blue being the latest entry. In our review of the flagship smartphone from HTC, we found that the shiny, reflective back looks great at a distance, but is a smudge and fingerprint magnet when you hold it. You can also expect the Ice White and Solar Red colours to make it to the country eventually.

HTC's latest flagship smartphone gets most of the high-end specifications you would expect in 2017. The HTC U11 runs on Android 7.1 Nougat with the company's HTC Sense skin on top. It sports a 5.5-inch Quad HD (1440x2560 pixels) Super LCD display with Corning Gorilla Glass 5 on top. Powering the HTC U11 is a 2.45GHz quad-core Qualcomm Snapdragon 835 SoC coupled with 6GB of RAM. It is offered with 128GB of built-in storage, which is expandable via microSD card (up to 2TB).