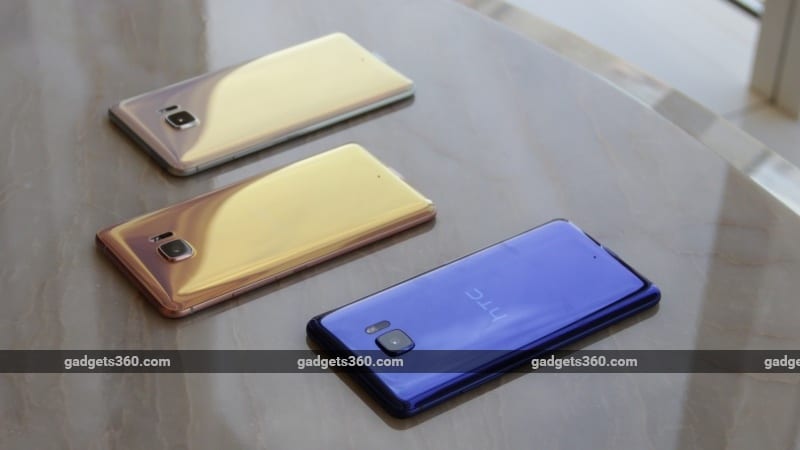 HTC cut prices for the HTC U Ultra and HTC Desire 10 Pro smartphones in India. The smartphones are now available for Rs. 52,990 and Rs. 23,990 respectively. The HTC U Ultra was launched last month for the price of Rs. 59,990 in the country, giving it an official price cut of Rs. 7,000 in just one month. On the other hand, The HTC Desire 10 Pro was launched in India in November last year for the price of Rs. 26,490. This means that the device gets a price cut of Rs. 2,500. Both the devices are available on the HTC India Store for purchase.

Starting with the more premium HTC U Ultra, the big highlight is their Sense Companion feature, an AI-based system that learns the user's daily patterns to provide usage recommendations and friendly advice. On the U Ultra, the Sense Companion will display important alerts and notifications on the second 'ticker-style' display, which is called the Priority Screen.

The HTC U Ultra runs Android 7.0 Nougat with Sense UI customisation on top. The smartphone sports a 5.7-inch QHD (1440x2560 pixels) Super LCD display, apart from a secondary 2-inch display with 1040x160 pixels resolution. It is powered by a quad-core Qualcomm Snapdragon 821 chipset coupled with 4GB of RAM. The U Ultra has 64GB of inbuilt storage variant, that is expandable via microSD card (up to 2TB).

As for optics, the HTC U Ultra comes with a 12-UltraPixel rear camera with 1.55-micron pixels, a BSI sensor, laser + phase detection autofocus, optical image stabilisation, an f/2.8 aperture, and dual-tone LED flash. At the front, HTC U Ultra sports a 16-megapixel camera with an UltraPixel mode, and a BSI sensor. Other specifications on the HTC U Ultra include 4G LTE with VoLTE, GPS/ A-GPS, Bluetooth v4.2, Wi-Fi 802.11ac, NFC, DLNA, Miracast, HTC Connect, and USB 3.1 Type-C connectivity options. The HTC U Ultra bears a fingerprint sensor on the Home Button, HTC BoomSound Hi-Fi edition stereo speakers, Hi-Res Audio support, as well as 3D Audio recording support with 4 microphones. It is powered by a 3000mAh battery with Quick Charge 3.0 that is rated to deliver up to 26 hours of talk-time and up to 13 days of standby time.

On the other hand, the dual-SIM (Nano-SIM) HTC Desire 10 Pro sports a fingerprint sensor, and runs Android 6.0 Marshmallow with the company's Sense UI on top.It sports a 5.5-inch full-HD (1080x1920 pixel) IPS LCD display with a pixel density of 400ppi and Gorilla Glass protection. It is powered by 1.8GHz octa-core MediaTek Helio P10 processor paired with 4GB of RAM. It offers 64GB of inbuilt storage that is expandable via microSD card (up to 2TB).