HTC U 'Squeezable Phone' Set to Launch on May 16 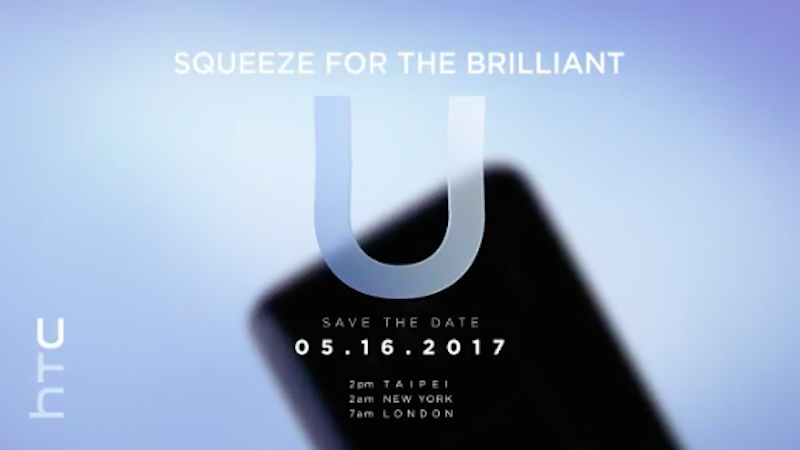 HTC U, the smartphone maker's has been in the news a lot this month. Earlier this week, the HTC U was leaked in images teasing a glass back and fingerprint scanner and another report suggested that the smartphone will come with IP57 certification and no 3.5mm headphone jack. Now, HTC has officially announced that the HTC U 'squeezable phone' will be unveiled on May 16. HTC confirmed the launch date via a tweet, which confirmed the 'U' name and the tagline 'Squeeze for the Brilliant U'.

HTC has also posted a five second teaser video for the HTC U. Notably, both the tagline and the teaser also confirm the smartphone's most talked about new feature, the Edge Sensor.

The Edge sensor, from what we know so far, refer to sensors on the sides of the HTC U that lets you quickly open apps and perform functions by simply swiping, squeezing or tapping the metal edges. Based on past leaks and the teaser, the sensors seem to be placed on the bottom half of the handset, right where one would normally grip the smartphone. This means you could potentially squeeze the HTC U to perform different actions.

Based on recent rumours, the dual-SIM HTC U will be running Android 7.1 Nougat, and sport a 5.5-inch QHD (1440x2560 pixels) display with Gorilla Glass 5 on top. The handset will be powered by the newest Qualcomm Snapdragon 835 SoC coupled with either 4GB or 6GB of RAM options. The latest teaser also suggests a fairly slim form factor for the HTC U.

The HTC U is tipped to sport a 12-megapixel Sony IMX362 sensor at the back and a 16-megapixel IMX351 sensor over at the front, suggesting a selfie-focused smartphone. Additionally, the smartphone will be offered with either 64GB or 128GB of internal storage depending on the RAM. The latest leaks rates the battery at 3000mAh with Quick Charge 3.0. Connectivity options listed include Wi-Fi 802.11 a/b/g/n/ac and Bluetooth 4.2.

The HTC U is said to come with dual speakers on the top and bottom and the USB Type-C port will support HTC's USonic earphones. Video and image capture is also tipped to get a boost with Smart Video Zoom support and real-time HDR scene detection, as well as four microphones embedded in the phone to record 3D audio or Hi-Res audio.