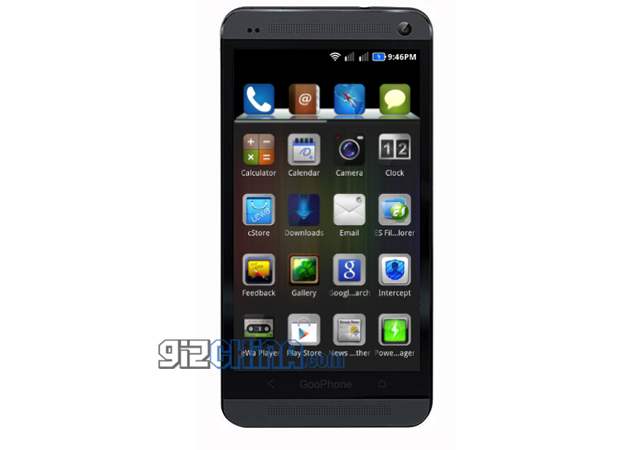 HTC may have announced its latest flagship smartphone HTC One on Tuesday but its Chinese clone has been around for a couple of days. As per the news reports on Gizchina.com, this smartphone is christened GooPhone One.

It is noteworthy, that GooPhone is quite famous for releasing very similar looking clones of flagship smartphones. Earlier the company had launched a clone of iPhone 5, which was dubbed GooPhone i5.

As per the pictures posted by Gizchina.com smartphone looks quite similar to the the HTC One. There are no details available for the specifications for the GooPhone but it is expected to have a 4.7-inch display just like the HTC One. As per unwired.com, GooPhone One might be a dual-SIM or dual-mode (GSM+CDMA) smartphone.

The HTC One comes with a 4.7-inch full-HD display with 468 pixels per inch packed in an aluminium unibody. It is powered by a 1.7GHz quad-core Qualcomm Snapdragon 600 processor alongside 2GB of RAM. Users can opt for a 32GB or 64GB model of HTC One. However, there is no provision to expand the storage.

HTC One comes with a 4-ultrapixel camera in the back and a 2.1-megapixel one in the front. There is a 2,300mAh battery on board. This smartphone will be available in three colour options - Grey, Black and Red.

This smartphone was unveiled at simultaneous events in New York and London on February 19, 2013.

As per the speculations, it was expected that HTC may launch two more smartphones - HTC M4 and G2 at this event. However, it now seems that these smartphone may debut at the Mobile World Congress (MWC) 2013.