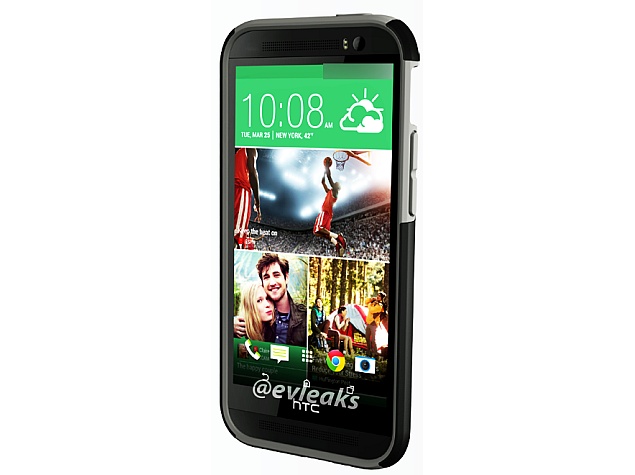 Amidst the range of rumours surrounding the unannounced HTC One's successor, also known as HTC One+, HTC One 2, HTC M8 or HTC One 2014, it is being reported that an alleged press image of the device has been leaked online.

One of the most reliable tipsters, @evleaks, has posted what is being claimed to be a press image of the upcoming HTC smartphone, seen covered by a protective case. The tipster posted the image on Twitter, stating "HTC M8, protected."

In the image (above), one can see the purported HTC M8 handset flaunting a front-facing camera (rumoured to be a 2.1-megapixel offering) supported by a flash. The dual speaker grills in front, which are considered to be part of the firm's design aesthetic now, is also seen sported by the handset.

The interface visible in the image is also said to be the new HTC Sense 6.0 UI, which is said to come integrated with Android KitKat 4.4 OS.

However, the camera on the HTC M8 is said to feature twin UltraPixel cameras this time. The twin sensors are said to bump up some of the camera's autofocus, image quality, and depth of field capabilities. However, the sensor size and resolution is as of yet not known.

Previous leaks by @evleaks indicate the smartphone may feature a 5-inch 1080p HD display, a quad-core Qualcomm Snapdragon 800 MSM8974 processor coupled with 2GB of RAM and Sense 6.0 UI on top of Android 4.4 KitKat.

The firm has announced that its much-anticipated HTC M8 smartphone will arrive on 25 March during a number of event in London and New York instead of being introduced at the upcoming Mobile World Congress 2014 event going to be held in Barcelona.