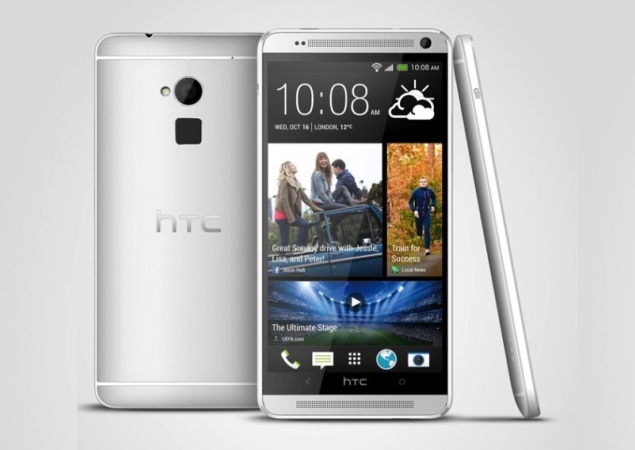 HTC's much-anticipated One Max phablet is now official, even ahead of the event scheduled for October 16 in Hong Kong. The device is expected to be available some time from the middle or end of October, and so far, there is no word on the pricing of the new phablet.

It comes with 5.9-inch full-HD LCD display and runs Android 4.3 Jelly Bean out of the box with HTC's Sense 5.5 UI on top. The new phablet measures 164.5x82.5x10.29mm and weighs 217 grams. The HTC One Max follows the same design as that of company's flagship smartphone, the HTC One.

The all new phablet from HTC features the long-rumoured fingerprint scanner at the back which according to Engadget lets users log-in with a swipe of fingertip. The HTC One Max is now the second device launched this year to come with a fingerprint scanner feature after the Apple iPhone 5s.

Other specifications of the HTC One Max include a 1.7GHz quad-core Qualcomm Snapdragon 600 processor, 2GB of RAM, and 16GB/ 32GB inbuilt storage variants with support for up to 64GB of additional external storage via microSD card. The device features HTC's UltraPixel Camera at the back while there is a 2.1-megapixel front-facing camera and also comes with HTC Zoe and HTC BoomSound, first seen on HTC One.

Connectivity features on the HTC One Max include Wi-Fi, Bluetooth, NFC, DLNA and HTC Connect. The device also packs a 3300mAh battery which can give up to 25 hours of talktime and 585 hours of standby time for 3G networks.