HTC One makes an appearance in Gold 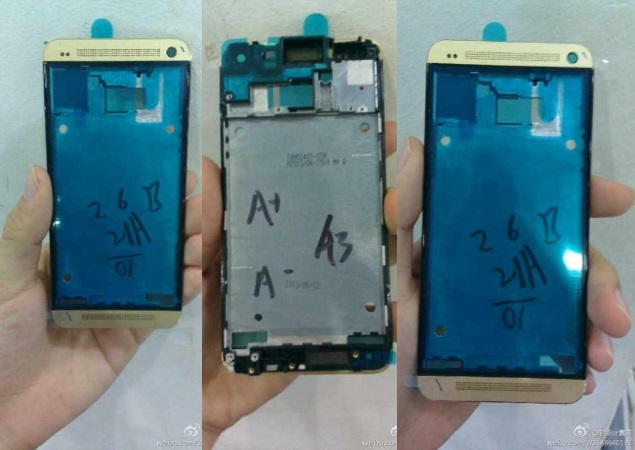 We recently witnessed Apple unveil the new iPhone 5s in an all new Gold colour variant, earlier this week. It now appears that another flagship smartphone is all set to join the Gold league that was kicked off by the Cupertino giant.

HTC's flagship, the HTC One has been spotted in a Gold colour, in the wild. The leaked images have been posted by New Cell Phone blog courtesy the Chinese forum Weibo. The leaked images show the front and rear chassis of the HTC One Gold model. However, the parts from the rear panel are missing in the images. The site does not reveal any additional details related to the alleged HTC One Gold variant.

Originally the HTC One was launched in two colour variants, Black and Silver. Soon, the company showcased a 'Glamour Red' version of the device. The Glamour Red variant of HTC One was offered initially in the UK through Phone4U and was later rolled out in other European countries.

Just to recap, the HTC One features a 4.7-inch screen with full-HD display. It is powered by a 1.7GHz quad-core Qualcomm Snapdragon 600 processor along with 2GB of RAM. Connectivity options include Wi-Fi, Bluetooth, GPS, NFC, Infrared and Micro-USB. The smartphone was launched with Android 4.1 (Jelly Bean) along with a brand new version of Sense UI. Recently, it was announced that the HTC One will get Android 4.3 by the end of September.