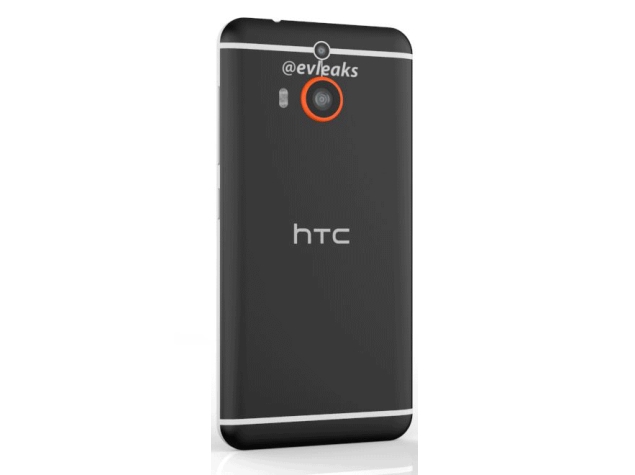 While HTC is busy promoting its recently unveiled One (M8) globally, rumours about its premium variant are coming thick and fast.

One of the major highlights of the alleged render is the rear camera of the device which is protruding with an orange coloured lining. The alleged render of the One (M8) Prime also hints that the Taiwanese handset maker might be continuing the duo camera setup in the premium variant of the HTC One (M8) (Review | Pictures). The front panel, as tipped by the leaked render, suggests that the dual loudspeakers will also be present on the One (M8) Prime.

Earlier, a whole bunch of specifications of the alleged HTC One (M8) Prime smartphone were leaked, all thanks to @evleaks.

The alleged HTC One (M8) Prime is said to be built from a composite of aluminium and liquid silicone. The smartphone is also likely to be waterproof, include a high speed Cat. 6 LTE radio, and a quad-core Snapdragon 805 SoC clocked at 2.5GHz. The tipster also mentioned about the 5.5-inch QHD resolution screen and 3GB of RAM, which goes in line with what a report revealed earlier this month. It has been also noted that the storage capacity on the smartphone is said to be 16GB.

We've hearing that Samsung is also working on a premium variant of its latest flagship smartphone, the Galaxy S5; however Samsung in the past has been refuting such reports.

It is yet to be seen which 'Prime' variant hits the market shelves first whether it's the alleged HTC One (M8) Prime or the Samsung Galaxy S5 Prime.