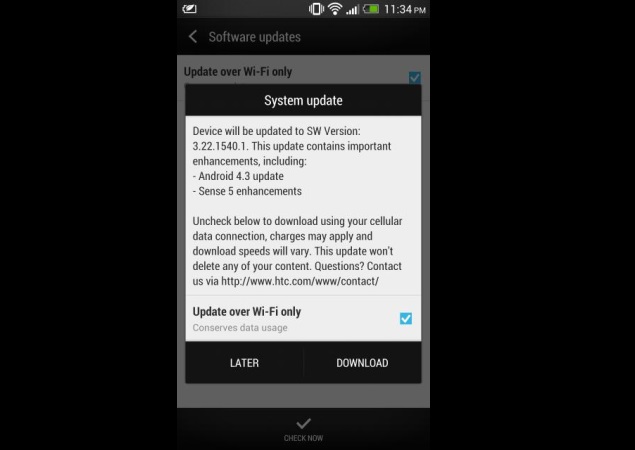 As reported on Wednesday, the HTC One had been rumoured to be receiving the Android 4.3 Jelly Bean update, now however, this rumour has been lent some credibility, with the update having been noticed by users to be rolling out globally, though no official statement has been released yet by HTC.

Some users at Xda-developer forum, located in different parts of the world, have reported getting the update on their HTC One. A shared screenshot of the device's update notifications reveals the build number, which is 3.22.1540.1, and claims to contain Android 4.3 Jelly Bean update and Sense 5 enhancements. The Android 4.3 Jelly Bean update for the HTC's flagship smartphone is reportedly available over the air (OTA).

A member of Xda forum claims to receive the update for his unlocked HTC One 32GB in US. While another member claims that his HTC One 64GB Developer Edition is receiving Android 4.3 update in Los Angeles, CA. As of now, the Android 4.3 Jelly Bean update has been confirmed for the US region but we assume that other regions will be receiving the update soon. While the Taiwanese handset maker has still not revealed details about any official Android 4.3 update rolling out to the HTC One.

Additionally, a user at forum confirmed that HTC One dual-SIM is also receiving an update for bug fixes including network stability and SMS transmission.

Previously, a tweet by HTC's president of global sales, Jason Mackenzie confirmed that the Android 4.3 update would be rolled out to the HTC One in US and Canada by the end of September.

HTC's 2013 flagship smartphone was launched in February and natively ran Android 4.1 Jelly Bean out of the box which was disappointing as the competing flagships like Samsung Galaxy S4 and Sony Xperia Z Ultra were based on Android 4.2.2.