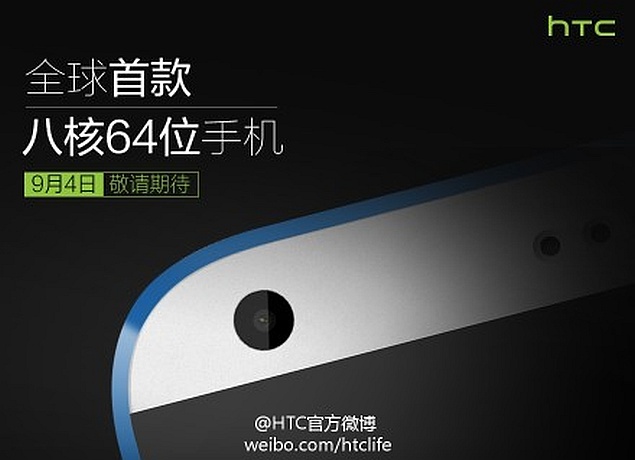 HTC has officially confirmed the existence of its first smartphone carrying a 64-bit octa-core SoC, the Desire 820, via Chinese social networking website Weibo. The Taiwanese firm has posted two images teasing the smartphone.

Though the specifications of the handset have still not been revealed, HTC does mention the Desire 820 will get showcased on September 4 at a pre-IFA 2014 event. The firm also teased the smartphone's IFA launch last week in an image.

The second image is more detailed as it shows what seems to be a front-facing camera of the Desire 820 placed on the top left-side. The image also mentions "world's first octa-core 64-bit phone."

While HTC did not give details on the device's processor, Qualcomm has confirmed that the HTC Desire 820 will be the first Android smartphone to use its octa-core 64-bit Snapdragon 615 chipset. The confirmation came via an image posted on the Qualcomm's Weibo account (via GforGames).

The image shows a Qualcomm Snapdragon processor fixed inside a smartphone with a tagline stating (translated) "The first use of #615 #Xiaolong's eight core 64 phones upcoming release, so stay tuned." While the post does not mention HTC Desire 820, the drawing of the smartphone's top camera looks similar to what seen in the second teaser image by HTC.

Notably, the Snapdragon 615 includes 8 Cortex-A53 cores paired with an Adreno 405 GPU. The chipset is mainly designed for mid-range smartphones.

To recall, Apple was the first to introduce a 64-bit mobile chipset in the market with its iPhone 5s smartphone.