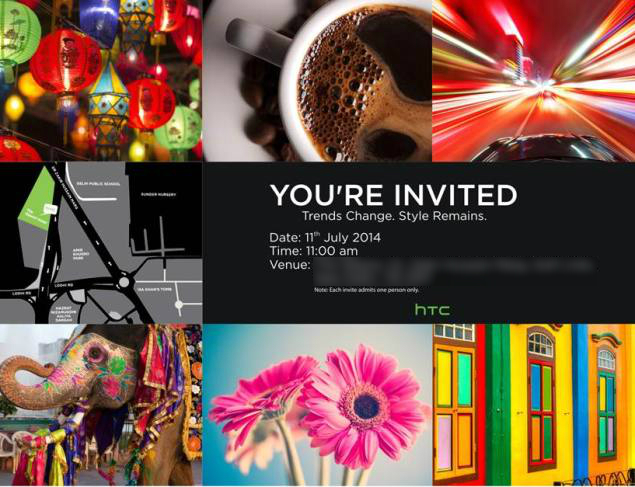 HTC has started sending press invites for an event scheduled on July 11 in New Delhi, India. While the invite fails to specify what the Taiwanese firm will announce, we expect it might introduce its recently unveiled HTC One (E8), One (M8) Dual-SIM, and the Desire 616.

For now, it might not be safe to place bets on the HTC Desire 616, which was announced only a couple of days earlier as an Asia-specific smartphone with no plans for a global roll-out, as per the company spokesperson. However, nothing can be confirmed until July 11.

To recall, the HTC Desire 616 Dual SIM sports a 5-inch display with an HD (720x1280 pixels) resolution, 1.4GHz octa-core processor paired with 1GB of RAM, 8-megapixel rear and a 2-megapixel front-facing camera, 4GB of inbuilt storage (expandable up to 32GB via microSD card), and a 2000mAh battery. The wireless connectivity options for the Desire 616 feature Bluetooth 4.0, Wi-Fi 802.11 b/g/n, GPS, GPRS/ EDGE and 3G. The handset was introduced on Monday.

The HTC One (M8) Dual SIM, other than the dual-SIM capabilities, offers the same specifications as the single-SIM variant. The smartphone was announced officially on July 3.

The One (M8) runs Android 4.4.2 KitKat with the company's brand new Sense 6 UI on top. The phone is powered by a 2.5GHz quad-core Qualcomm Snapdragon 801 processor, alongside 2GB of RAM. The HTC One (M8) comes with a 5-inch full-HD display and will be available in 16GB and 32GB storage options, with support for expandable storage via microSD cards of up to 128GB capacity. It comes in Gunmetal Grey, Amber Gold, and Glacial Silver colour options. The phone comes with a 2600mAh battery.

The HTC One (E8) (also available in a dual-SIM variant) on the other hand, sports a similar design to the original HTC One (M7), though it features curvier, plastic body (polycarbonate) instead of a metal casing. The One (E8) was made official by the firm in June this year.