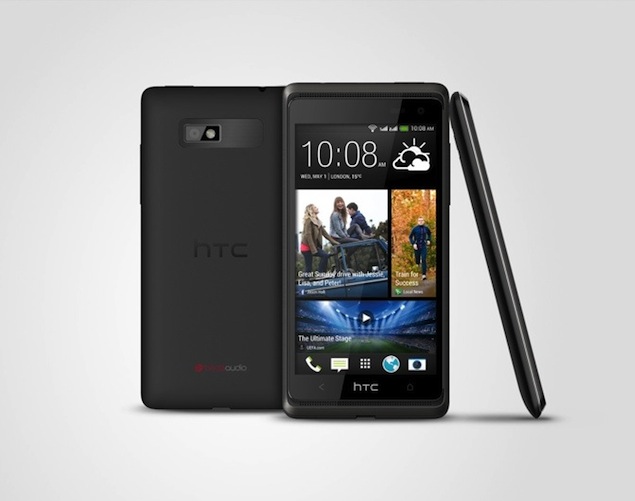 HTC Desire 600, the mid-range dual-SIM smartphone that was unveiled back in May, has been launched in India for Rs. 26,990. Earlier this month, the HTC Desire 600 made an appearance in India via online retailer, but there was no price.

The HTC Desire 600 sports a 4.5-inch Super LCD2 display of 540x960 pixels resolution and is powered by a 1.2GHz Snapdragon 200 quad-core processor alongside 1GB of RAM and 8GB of expandable storage. It comes with an 8-megapixel rear camera and a front-facing 1.6-megapixel shooter. It is a dual-SIM device with GSM+GSM support. The dual front-facing speakers of the HTC Desire 600, complete with built-in amplifiers offer a sharper smartphone sound, that HTC labels 'BoomSound'. Beats Audio integration is included as well.

The phone runs Android 4.1 Jelly Bean with HTC Sense 5.0 on top with BlinkFeed and other software features, seen earlier with the HTC One. HTC Desire 600 comes with a 1860mAh battery and connectivity options include Bluetooth 4.0, Wi-Fi, GPS and 3G.

Commenting on the launch of the phone in India, Faisal Siddiqui, Country Head, HTC India said, "People rely on their smartphones every day to be their news channel, email inbox, social network and music player. The HTC Desire 600 dual sim combines speed and easy multitasking with the truly innovative HTC BlinkFeed home screen. The result is an affordable mid-range phone that sets the standard for its class, keeping the busiest user up-to-date at a glance and offering them the power and range of features to switch between work and play."