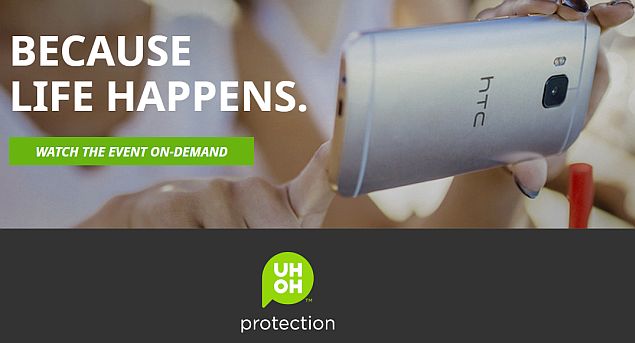 HTC on Wednesday announced the much-anticipated 'Uh-Oh' protection plan that will offer a free phone replacement in the case of a cracked screen, water damage, or a carrier switch within the first twelve months from the date of purchase.

HTC's Jason Mackenzie, President, HTC America revealed the news at an AMA (Ask Me Anything) session. HTC's 'Uh-Oh' protection plan will include the new flagship, the HTC One M9, alongside its predecessor, the HTC One (M8). It's worth noting that the new protection plan announced by HTC is only for US customers and there is no word on a broader rollout of the service.

Alongside, the firm also announced the HTC One M9 will be available from carriers in the US starting April 10.

Under the new 'Uh-Oh' protection plan, HTC will offer only one free replacement phone for cracked screen, water damage, and carrier switch while in case the user doesn't need a replacement - the company will offer $100 off toward the purchase of the next HTC One.

The Taiwanese company has not revealed any time-frame for the rollout of the 'Uh-Oh' protection plan; though the company's Terms and Conditions page notes that the plan will cover the HTC One (M8) bought on or after April 10, 2015 and prior to August 31, 2015 while the new HTC One M9 purchased prior to August 31, 2015. Notably, HTC's new service covers consumers for one full year, unlike HTC Advantage's six month policy.