HTC could crown the 'Tiara' as the first Windows Phone 8 GDR2 smartphone: Report 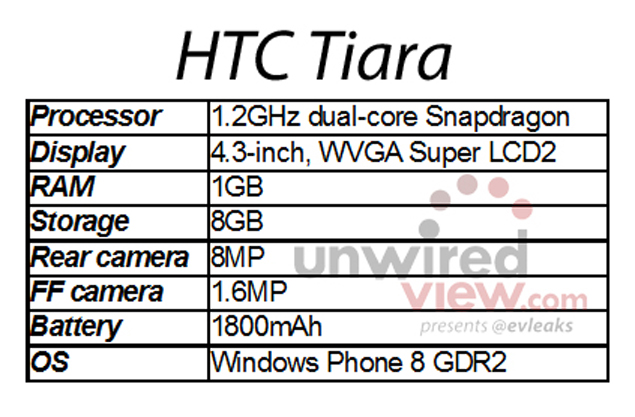 HTC launched two Windows phone 8 devices last year namely the 8X and 8S and the company is certainly planning to stick with the OS, despite the fact that it pulled the plug on a device called Zenith, which was likely to be a WP8 flagship.

However, Unwired View now reports that the Taiwanese manufacturer is working on a smartphone called Tiara that runs on Windows Phone 8 GDR2, a second update to Microsoft's mobile operating system after the recent "Portico" update, according to rumoured specifications.

As far as specs go, the HTC Tiara is rumoured to feature a 4.3-inch Super WVGA LCD2 display, a 1.2GHz dual-core Qualcomm Snapdragon CPU with 1GB RAM, 8GB of storage, 8-megapixel rear and 1.6-megapixel cameras and a 1800mAh battery. It's likely to be a mid-range offering just like the company's Android-powered HTC One SV smartphone.

The report notes that the main difference in the two phones lies between their camera resolution. The One SV has a 5-megapixel camera as opposed to the Tiara's 8-megapixel one, with the latter clearly outshining the One SV.

It seems unlikely for HTC to acknowledge the device name as Tiara. There's a possibility that it will continue to use the '8 something; branding. The 'X' and 'S' are already taken, so HTC has a choice from the remaining 24 letters of the alphabet. The device is tipped for a release in mid-May.

Until then, HTC is garnering all the attention for its recently launched HTC One featuring a 4.7-inch full-HD display (468ppi) in an aluminium unibody, a 1.7GHz quad-core Qualcomm Snapdragon 600 processor alongside 2GB RAM. Both front and rear cameras come with full-HD video recording capabilities as well as Optical Image Stabilisation (OIS). HTC One is powered by a 2,300mAh battery.

Moreover, Phil Roberson, head of HTC UK and Ireland has made it extremely clear that the HTC One will be the only 'One' flagship device from the company. He specifically said, "HTC One is the flagship device. Last year we had the X and the S, where people had different personal preferences between the two. We just said, let's just create one flagship device for this year."
Comments