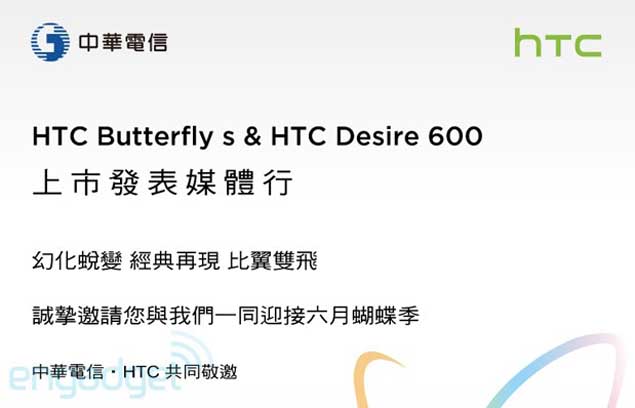 There had been rumours suggesting that HTC is working on a smartphone dubbed HTC Butterfly S. However, up till now there was no official confirmation in regards to the same.

Things seemed to have changed now as Engadget.com is reporting that the Taiwanese smartphone maker has sent out invites to a June 19 event. As per this invite, Taiwanese telecom operator Chunghwa Telecom will be unveiling two new smartphones at the event - HTC Butterfly S and HTC Desire 600.

HTC had already announced its Desire 600 in May 2013. This smartphone is a dual-SIM (dual-active) smartphone that offers HTC's latest Sense 5 experience including BlinkFeed and BoomSound, most recently launched as part of the HTC One.

HTC Desire 600 sports a 4.5-inch Super LCD2 display of 540x960 resolution and is powered by a 1.2GHz Snapdragon 200 quad-core processor alongside 1GB of RAM and 8GB of expandable storage. It comes with an 8-megapixel rear camera and a front-facing 1.6-megapixel shooter.

Running the "dual active" system, the HTC Desire 600 dual-SIM allows you to have two SIM cards active all the times, enabling you to receive a call on one line, even if you are already using the other.

The phone runs Android Jelly Bean with HTC Sense 5.0 on top with BlinkFeed and other features. At the time of announcement, it was disclosed that HTC Desire 600 dual-SIM will be available with mobile operators and major retailers in Russia, Ukraine and MEA from early June 2013. Now we know that Taiwan is soon going to get this smartphone, but till now there is no word in regards to the price of this smartphone.