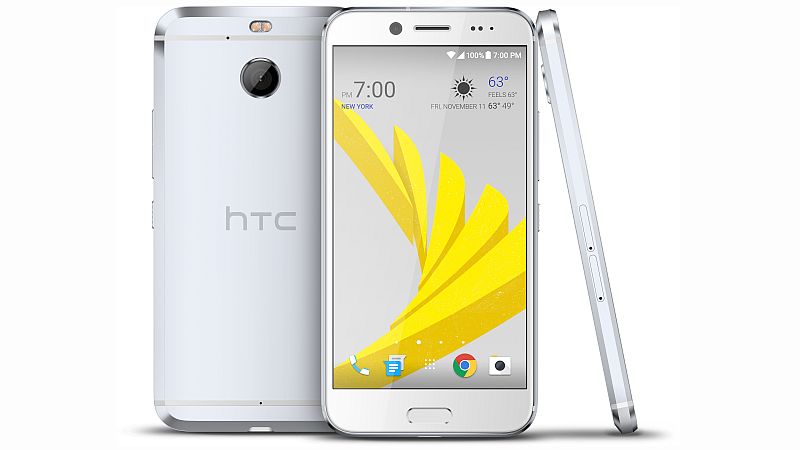 HTC in collaboration with Sprint has unveiled the long-rumoured Bolt high-end smartphone. The all-new HTC Bolt is available to buy starting Friday via Sprint stores as well as the company's online store in the US. It has been priced at $25 per month over 24 months (translating into $600 or Rs. 40,250) with instalment billing. There's no word on its release in India or other international markets.

Sprint is promoting the HTC Bolt as its "fastest smartphone ever" and claims support for 3x20 MHz carrier aggregation thanks to the Qualcomm Snapdragon X10 LTE modem. HTC, following the suit of new iPhone models, has ditched headphone jack and packs USB Type C-enabled headphones with its new smartphone. The Bolt smartphone also comes support for HTC BoomSound Adaptive Audio

Featuring a 5.5-inch QHD (1440x2560 pixels) display, the Bolt is HTC's first water-resistant aluminium unibody device. The phone comes with an IP57 rating for water, splash and dust resistance. Though, HTC clearly mentions that the normal wear and tear may decrease splash and water resistance over time and stresses "do not intentionally submerge HTC Bolt."

One of the biggest questionable hardware choices made by HTC for the Bolt is putting the date Qualcomm Snapdragon 810 under the hood, which is known to be responsible for heating issues with many smartphones. It packs 3GB of RAM and comes with 32GB of storage. The Bolt supports expandable storage via microSD card (up to 2TB). It sports a 16-megapixel rear camera which comes with OIS (optical image stabilisation), 4K video recording, and PDAF (phase detection auto focus). There is an 8-megapixel front-facing camera on-board as well and also features screen flash. The HTC Bolt packs 3200mAh battery and supports Qualcomm Quick Charge 2.0 for fast charging.

"The HTC 10 released earlier this year was the most advanced smartphone we've ever built, so we knew we had to raise the bar even higher for Sprint's most advanced ever network. For HTC Bolt, we took everything that was so great about the HTC 10 and made it even better. And, of course, we took the wireless speed and supercharged it with Sprint, turning HTC Bolt into a smartphone unlike any you've ever experienced," said Andre Lonne, President of HTC America.