Honor X10 Max is expected to come with a 7.09-inch display and dual speakers. 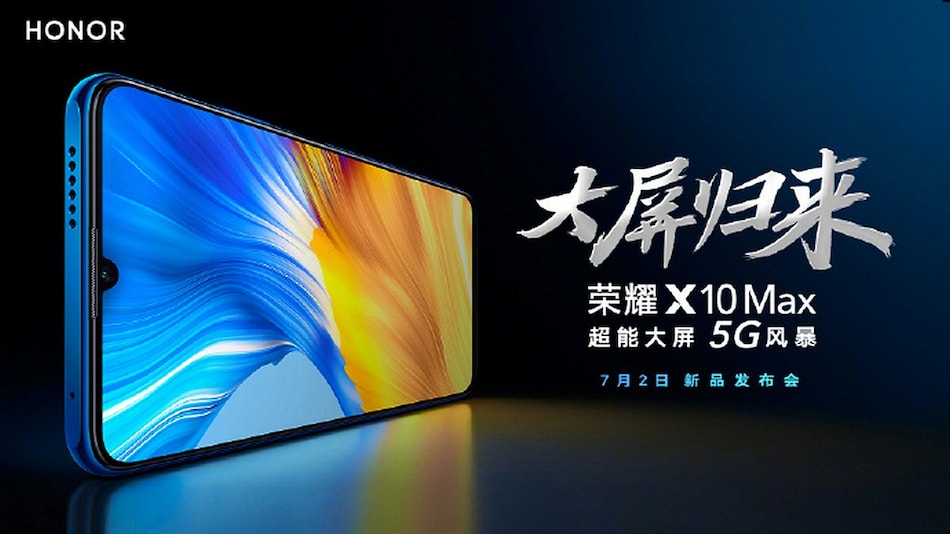 Honor X10 Max may be powered by the Dimensity 800 SoC

Honor X10 Max is the company's upcoming addition to the Honor X10 series that includes the Honor X10 that lunched in China last month. While the Honor X10 Max is scheduled for launch on July 2, its specifications and design have been reportedly leaked on Chinese social media website Weibo. One of the leaks posted on the website states that the Honor X10 Max will be powered by the MediaTek Dimensity 800 5G SoC while the other leak shows an alleged live image of the phone.

Known tipster Digital Chat Station (translated) posted a list of specifications on Weibo for the Honor X10 Max. It shows the phone runs on Android 10 with Magic UI 3 on top. The phone is said to be powered by the MediaTek MT6873 SoC, which is believed to be the MediaTek Dimensity 800 5G SoC that was launched earlier this year. The camera setup on the back includes a 48-megapixel primary sensor while the selfie shooter is an 8-megapixel sensor. The Honor X10 Max may be backed by a 5,000mAh battery with support for 22.5W fast charging. In terms of dimensions, the phone is said to measure 174.46x84.91x8.3mm and weigh 227 grams.

The Honor X10 Max screen size is said to be 7.09-inch and this was previously leaked in a live image, as per a report by ITHome.

The live image shared by another tipster on Weibo shows the front of the phone with a SIM tray to the left side and a notch on the display. It is a blue variant of the phone, which is most likely one of the colours it will come out in. Additionally, from the poster shared by Honor on Weibo, it can be seen that the Honor X10 Max comes with a speaker grill on top, which may suggest that the phone has dual speakers.

The poster states that the Honor X10 Max with 5G support will be launched on July 2. As of now, the company has not shared information on international availability. To recall, the Honor X10 was also launched in China with no signs of if and when it will be sold in other countries.