Honor View 20 With 'Hole-Punch' Selfie Camera, Up to 8GB of RAM Launched in India: Price, Specifications 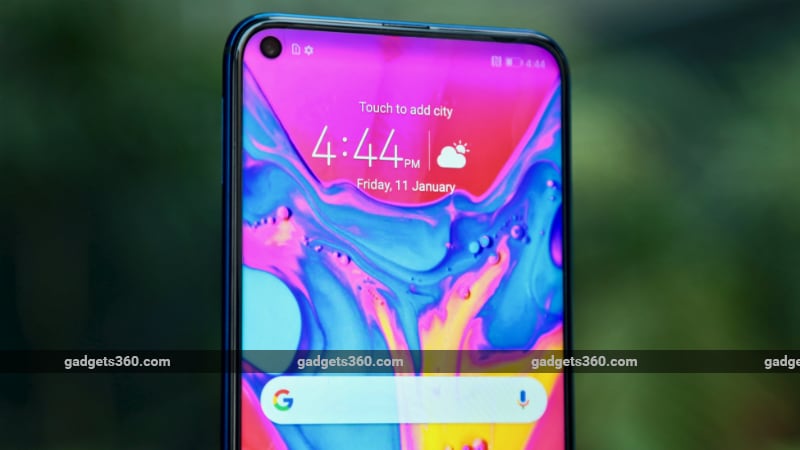 Honor View 20 price in India starts at Rs. 37,999 and it will go on sale via HiHonor Store, Amazon.in

Honor View 20 has been officially launched in India today. The latest Honor phone comes with a 'hole-punch' selfie camera. Honor has also packed a 48-megapixel Sony IMX586 sensor along with a time of flight (ToF) sensor at the back of the Honor View 20. The new smartphone is powered by Huawei's flagship-grade HiSilicon Kirin 980 SoC that is coupled with up to 8GB of RAM. Additionally, the Honor View 20 sports an Aurora Nanotexture pattern at the back that forms a V-shaped design when light reflects on the surface. The phone was originally introduced in China as Honor V20 and later debuted internationally as Honor View 20.

The Honor View 20 price in India starts at Rs. 37,999 for the 6GB RAM/ 128GB storage variant, while its 8GB RAM/ 256GB storage option is priced at Rs. 45,999. The company has announced three colour variants - Phantom Blue, Midnight Black, and Sapphire Blue colour options. Honor View 20 will go on sale through Amazon.in and HiHonor Store in the country starting 12am (Midnight) IST from Wednesday, January 30. It will also be available via Reliance Digital from February.

The USP of the Honor View 20 is its display hole for the selfie camera that sits on the top-left edge of the front panel. The earpiece of the smartphone is almost hidden along the frame at the top to deliver a nearly full-screen experience. Further, the smartphone has an Aurora Nanotexture pattern at the back that enables a V-shaped when light reflects on the surface.

Unlike many other competitive models, the Honor View 20 features a 3D ToF sensor at the back that enhances depth details as well as enables 3D and AR-style apps. The smartphone also has a PC Mode that enabling a desktop-like experience when connected with a monitor, keyboard, and a mouse. Also, the Honor View 20 comes preloaded with an AI Video Editor app and has an AI Shopping visual search technology.

The dual-SIM (Nano) Honor View 20 runs Magic UI 2.0 on top of Android Pie and features a 6.4-inch full-HD+ (1080x2310 pixels) TFT LCD All-View display along with a 19.5:9 aspect ratio, 91.82 percent screen-to-body ratio, and a 398ppi of pixel density. Under the hood, there is an octa-core HiSilicon Kirin 980 SoC, coupled with 6GB and 8GB RAM options. There is also a liquid cooling system to enable thermal management.

On the optics front, the Honor View 20 has a dual rear camera setup that comprises a 48-megapixel Sony IMX586 sensor along with an f/1.8 aperture, 960fps slow-motion video recording, autofocus, AI HDR, and an LED flash module. There is also a secondary, 3D ToF sensor. For selfies, the smartphone has a 25-megapixel camera sensor at the front along with an f/2.0 aperture and a fixed focus lens.