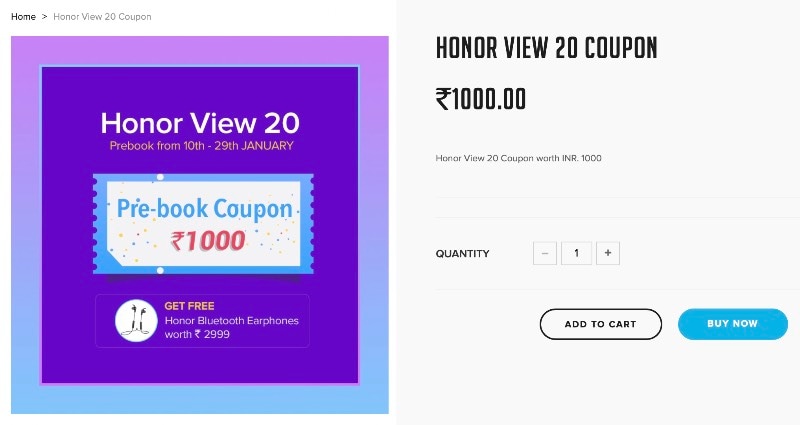 Honor View 20 India pre-bookings are now open, with an expected price around Rs. 40,000

Honor View 20 India pre-bookings are now open via the Honor India official website. Earlier on Friday, an Amazon India listing suggested that the pre-bookings will start from January 15, but at least the official Honor India website seems to have jumped the gun. We already know the Honor View 20 will be officially launched in India on January 29. For those unaware, Honor View 20 is the global variant of the Honor V20 launched in China last month. Its key highlight is the display hole for selfie camera, dual camera setup at the back, and a 48-megapixel sensor.

Honor View 20 pre-bookings are now open on the company's official store, while the Amazon listing still says that the pre-booking in India starts from January 15 and go on till January 29. The company is offering free Honor Sport BT earphones to all customers that pre-book the device on either platform.

In order to avail this offer on Amazon India, head to the Honor View 20 pre-booking page after January 15, choose the denominator of Rs. 1,000, and purchase the gift card. The gift card will be emailed to the user, and on January 30 when the sale begins, the user can purchase the Honor View 20 from the same account as the gift card purchase. After the purchase, Amazon will then email the coupon code for the free Honor Sport BT earphones by February 15. Users can then grab the earphones for free from Amazon by entering the coupon code at checkout.

As for the HiHonor India store, the Huawei sub-brand Honor is also hosting Honor View 20 India pre-bookings on its own site, though it's already accepting pre-orders like we mentioned earlier. The same Honor Bluetooth earphones is being offered, while interested customers will have to pay the same Rs. 1,000 to pre-book via the Honor View 20 pre-book coupon. The amount is redeemable against purchase post launch.

To recall, the Honor View 20 was originally unveiled in China in December as the Honor V20. It is set for official launch in Paris on January 22.

Considering that the Honor View 20 is the global variant of the Honor V20, it is expected to pack identical specifications to those of the Chinese model. In terms of the software, the View 20 runs Magic UI 2.0 based on Android 9 Pie. The Magic UI is very similar to its predecessor the EMUI, apart from a new colour scheme, real-time in-call voice translations, and more.

The phone will feature a 6.4-inch full-HD+ (1080x2310 pixels) display with 19.5:9 aspect ratio and 398PPI pixel density. It will be powered by 7nm octa-core HiSilicon Kirin 980 SoC and include up to 8GB of RAM. The Honor smartphone's inbuilt storage will be 128GB or 256GB, depending on the model. There is however no memory expansion slot in the phone.

The Honor View 20 features a dual-camera setup on the back with a 48-megapixel Sony IMX586 sensor with an f/1.8 aperture and a secondary 3D Time of Flight (ToF) sensor. There is a 25-megapixel front camera as well on the phone with f/2.0 aperture and fixed focus support.

Additionally, the Honor View 20 packs a 4,000mAh battery and the connectivity options like Bluetooth v5.0 and Wi-Fi 802.11 a/b/g/n/ac. There is USB Type-C port as well on the phone.