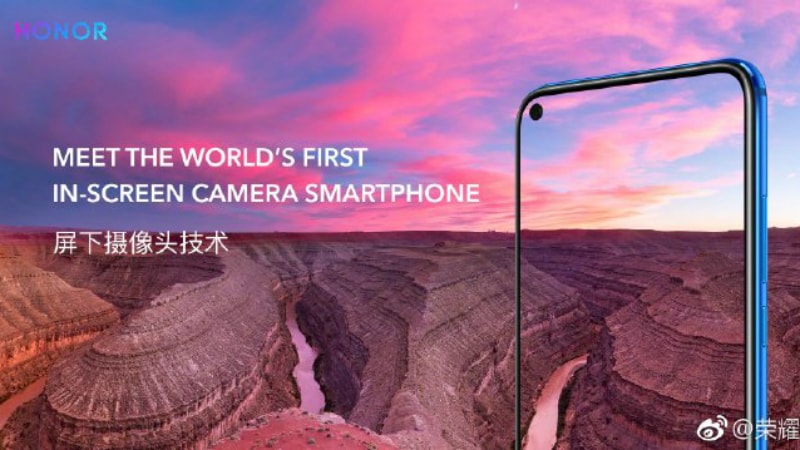 Huawei-owned sub brand Honor has unveiled its latest Honor V20 at an event in Hong Kong on Monday. Successor to last year's Honor V10 (globally known as the View 10), the Honor V20 is the company's first smartphone to sport a selfie camera display hole and a 48-megapixel rear camera sensor. The company appears to have timed the surprise launch to beat Samsung to the launch of its first smartphone with a display hole for selfie camera, the Samsung Galaxy A8s, which launched within hours of Honor's unveiling.

The Honor V20 is the world's first smartphone to sport the Sony IMX586 sensor - the first 48-megapixel sensor available in the market. The Honor V20 is powered by the latest HiSilicon Kirin 980 SoC, and other features will be revealed by the brand at the launch event in Beijing, China on December 26. The Honor V20's global launch is scheduled for January 22 in Paris, France, the company's global Twitter handle revealed. In countries apart from China, the smartphone will be called the Honor View 20, as was the case with the Honor V10 and Honor View 10 last year.

The price of the Honor V20 has not been revealed at the announcement in Hong Kong. However, we can expect Honor to announce the phone's China price at the event in Beijing on December 26, and the global pricing at the event in Paris next month.

Touted as the “world's first in-screen camera smartphone”, the Honor V20 has a small display hole on the top left corner of the screen. The hole itself has a diameter of 4.5mm, helping increase the screen-to-body ratio. It also bears a 48-megapixel Sony IMX586 camera sensor at the back, which comes with a 1/2.0-inch CMOS sensor, 4-in-1 Light Fusion, 4 times sensor HDR, and AI capabilities. Honor V20 is powered by the latest 7nm octa-core HiSilicon Kirin 980 SoC.

Other than that, Honor claims that the V20 sports a premium design with 5-axis ring dispensing technology, 0.1mm precision assembly, and a customised camera lens. One of the teaser images suggests that the phone might get GPU Turbo gaming technology.

Link Turbo is another feature that Honor announced at the event today. This is essentially a technology that aims to combine Wi-Fi and LTE connections to offer lag reduction and faster speeds using on-device and cloud multi-path aggregation. It uses AI capabilities to provide the most optimal result.