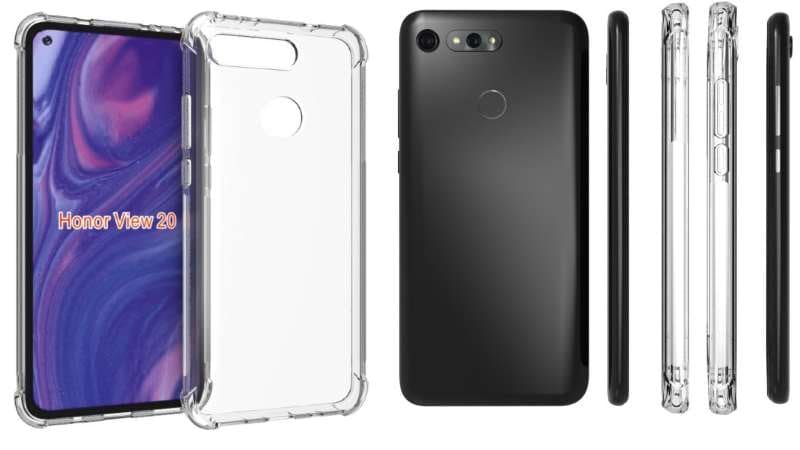 Fresh leaks have shown what the front and back of the soon-to-be-launched Honor V20 could look like. The leaked images are meant to show off a transparent case, and full renderings of the front and back of the phone itself can be seen. The Honor V20 will be launched in China on December 26. The same phone will then roll out to international markets under the name Honor View 20, starting with a launch event in Paris, France on January 22. Quite a lot about the design and specifications of this upcoming smartphone is already known, thanks to multiple prior leaks as well as official teasers that Honor itself has put out.

The case design renderings, spotted by Gizmochina.com, are credited to Slashleaks.com user Dimitri12 and are said to have originated from the case manufacturer itself. The front of the phone can clearly be seen, and the most noticeable thing is the hole-punch front camera sticking through the screen. Honor has touted its hole-punch as the smallest and least disruptive in the industry at 4.5mm without a black border, compared to other implementations such as Samsung's.

There are rounded corners and no notch. The render appears to make the purported 6.4-inch full-HD screen's borders look quite narrow. There appear to be no other distinguishing marks on the front of the phone.

As for the rear, a horizontal camera module can clearly be seen. Correlating these visuals with previous leaks and announcements, it appears that there is a primary camera based on Sony's new 48-megapixel IMX586 sensor with large 0.8-micron pixels and optimisations for shooting in low light. Honor has previously shared examples of photos that it says were taken with this camera. Official posters have revealed that 960fps slow-mo video recording will be a feature of this phone.

In addition to a secondary rear camera, the Honor V20 (or Honor View 20) is said to have a secondary camera and flash, as well as a Time-of-Flight 3D depth sensor that could be promoted as a third rear camera. This sensor would help accurately measure distances to help the phone capture depth information for portrait shots and Bokeh effects. The horizontal strip contradicts previous leaks of a purported Honor V20 Maserati special edition with a vertical multi-camera module.

The flagship-grade Honor V20 aka Honor View 20 is widely reported to be powered by the Huawei Hi-Silicon Kirin 980 processor, with eight cores, and manufactured using a 7nm process. The phone has been confirmed to feature a 4000mAh battery and quick charging. Purported benchmark results have appeared online, hinting that this phone could come in variants with 6GB and 8GB of RAM, and storage ranging from 64GB to 256GB. Official teasers have mentioned an “advanced GPS” system.