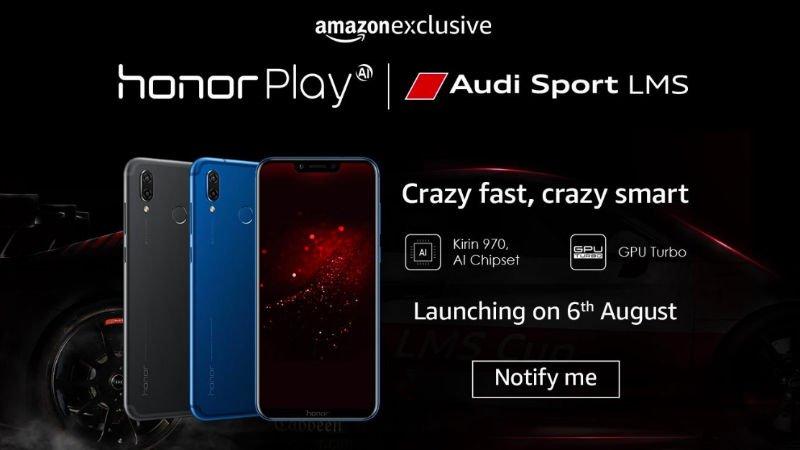 The Honor Play India launch event is scheduled for today, August 6, bringing the gaming-focused smartphone to the country. Apart from the large 6.3-inch display and HiSilicon Kirin 970 SoC, the new Honor Play smartphone will have the company’s new GPU Turbo tech for better gaming and overall performance. It has already been confirmed to be an Amazon exclusive and will go on sale at 4pm IST today, according to teasers by Honor India. Moreover, fans can expect a Honor Play variant developed in partnership with Audi Sport LMS, likely featuring design elements inspired by the premium car brand.

As for the specifications, the dual-SIM (Nano) Honor Play runs EMUI 8.2 based on Android 8.1. The smartphone sports a 6.3-inch full-HD+ (1080x2340 pixels) with 85 percent NTSC colour gamut. It is powered by the octa-core Huawei HiSilicon Kirin 970 SoC along with Mali-G72 GPU and the built in NPU (neural processor unit). The handset comes in 4GB and 6GB RAM variants.

The Honor Play is equipped with 64GB of inbuilt storage, expandable via microSD card (up to 256GB). Connectivity options include 4G VoLTE, Wi-Fi 802.11ac, Bluetooth 4.2, GPS, and USB Type-C. Sensors onboard the smartphone are an accelerometer, ambient light sensor, gyroscope, and proximity sensor.