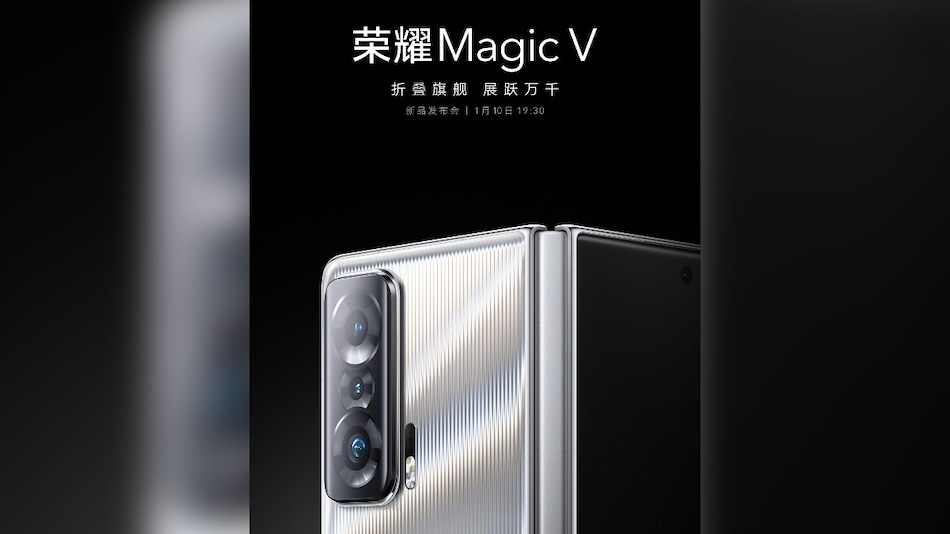 Honor Magic V foldable phone launch will take place on January 10, the company has announced. The phone will sport the best folding screen on the market with its “most complete structural design” and will feature complex hinge technology, as per Honor CEO Zhao Ming. Meanwhile, the smartphone has allegedly been spotted on the Geekbench database, hinting at some key specifications of the foldable including a Qualcomm Snapdragon 8 Gen 1 SoC. It could be the first foldable handset powered by the latest Snapdragon chipset.

As per a post by Honor on Weibo, the Honor Magic V smartphone will be launched at an event scheduled for January 10 at 7.30pm local time (5pm IST).

According to Honor CEO Zhao Ming, the Honor Magic V will pack the best folding screen on the market with its “most complete structural design”. The smartphone is expected to adopt a dual-screen design and could feature an 8-inch internal display and a 6.5-inch external display.

Zhao also took potshots at competitors and said that some manufacturers have violated the original intention of folding phones by introducing smaller folding screens. The executive also said that the Honor Magic V will feature a complex hinge technology. The company teased this hinge design in a short video which also suggests that there will not be a gap between the panels when the phone is folded. The outer screen is also shown with a centrally-aligned hole-punch cutout for the front camera. It could be priced at CNY 10,000 (roughly Rs. 1.17 lakh)

Tipster Digital Chat Station had claimed that the Honor Magic V will feature a 50-megapixel primary sensor in the triple rear camera setup. As per the tipster, other features of the phone will include one display with a 90Hz refresh rate and another with 120Hz refresh rate. The foldable handset is tipped to pack 66W fast charging technology and Android 12. The tipster also claimed that the phone will be powered by Qualcomm Snapdragon 8 Gen 1 SoC.

The information about the SoC has also been spotted by the alleged Geekbench listing of the Honor Magic V. The smartphone is said to have model number model Honor MGI-AN00. The listing says it will be powered by Qualcomm Snapdragon SM8450 SoC, which is the code name for the Qualcomm Snapdragon 8 Gen 1 chipset. The SoC is said to be paired with 12GB of RAM. The phone is listed to run Android 12. It scored 1,176 points in the single-core test and 3,440 points in the multi-core test.