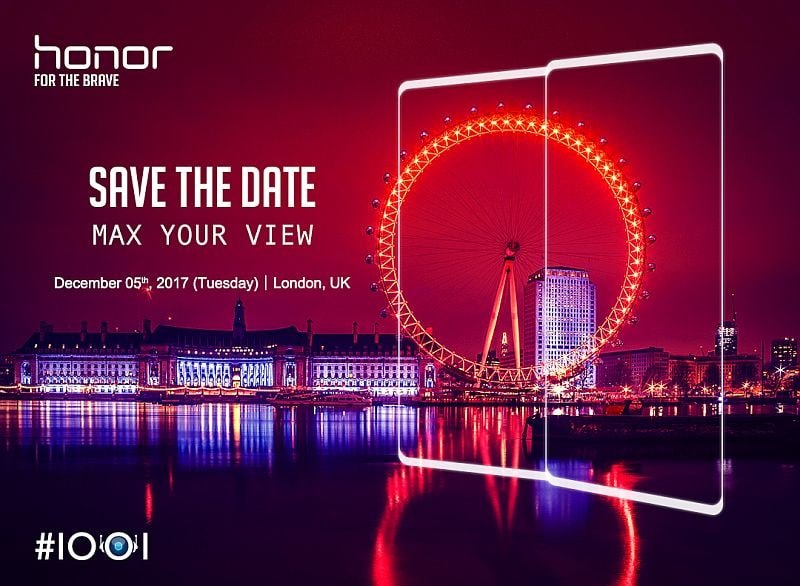 Huawei brand Honor,has confirmed it will be launching a new bezel-less smartphone on December 5. The Chinese company has started sending event teasers confirming the launch date.

The official 'save the date' teaser comes with "Max your view" tagline which clearly hints at a smartphone with more screen space. The teaser also has a phone outline with thin bezels and 18:9 aspect ratio display. The teaser also confirms other features on the handset like a dual camera at the back, and possible AI integration. The AI integration is tipped by a droid placed at the bottom of the teaser image. The official teaser reveals London as the venue for the event which may mean that the new bezel-less smartphone may be made available initially in the country alongside other European markets.

Honor on Wednesday launched the Honor 7X featuring a large 18:9 display. The Honor 7X pricing starts at CNY 1,299 (roughly Rs. 12,890) and goes till CNY 1,999 (roughly Rs. 19,820) for the top-of-the-line model. The highlight of the device is its 5.93-inch full-HD+ (1080x2160 pixels) curved display featuring an 18:9 screen ratio support and minimal bezels in a unibody metal form factor. Other specifications include dual-SIM support; runs Android 7.0 Nougat-based EMUI 5.1; powered by an octa-core HiSilicon Kirin 659 SoC; 4GB of RAM, and houses a 3340mAh battery. There's a duo of 16-megapixel and 2-megapixel rear cameras, and an 8-megapixel front-facing camera. It will go on sale in China on October 17. As of now, there's no word whether the Honor 7X will be unveiled in other markets outside China.

Tiktik App Can Help Find the Best Network in Your Area
Echo Dot, Echo, or Echo Plus: Which One, if Any, Should You Buy?